Mamumamu list is a well-known rating list for professional go players. Most of players at least heard of it. But because it’s in Japanese it can be a little annoying to use. Even I haven’t really gotten past the main list until now.

Thus I decided to make an overview of the features. There’s quite a bit of information there.

The main part of the website are rating lists, one for Japanese players only and another for all professional players.

The list itself is mostly self-explanatory. Association field differentiates between Kansai Kiin and Nihon Kiin, and different branches of Nihon Kiin too (Tokyo, Kansai, Chubu). Rating values go from around one to around ten, this might be a little unusual after the thousands of rating points we’re used to seeing. The table can be sorted by some of the fields.

If one scrolls all the way down, there’s a second table there that shows players whose rating deviation is too high to be included in the main table. Players like Catalin Taranu are there because they stopped playing, or like Cho Kosumi because they haven’t played enough games yet.

If one scrolls to the bottom, there’s a table showing how rating difference corresponds to win probabilities.

This is simply a collection of past lists for each date. Japanese rankings start at 1951, until 1988 it’s updated every 3 months, and since then it’s every month.

Let’s see who is the strongest Japanese at 40 years old. 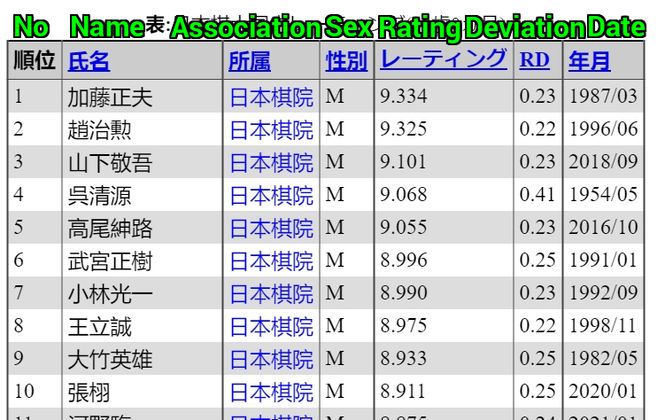 Apparently it’s Kato Masao in 1987, then Cho Chikun, then Yamashita Keigo who reached 40yo only recently and then Go Seigen.

I imagine it’s more like a toy because we have to accept that these ratings are comparable at different time points. 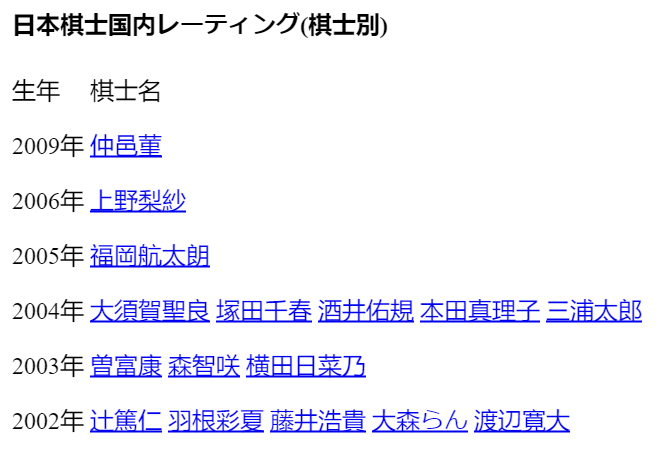 These pages list rating of each player over time. The players grouped by birth year for easier navigation. There’s a whole group of players with unknown birth year which is curious. 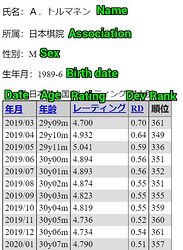 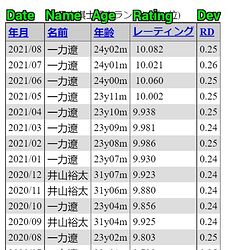 This is quite self-explanatory, a single table containing top player for all dates. 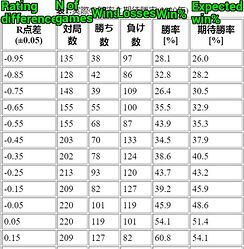 And a graph showing theoretical red lines and real values. 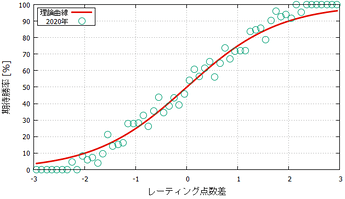 To correct 5.5 komi black is added 0.13 rating points when calculating win probability. To put it into perspective, 0.15 rating difference corresponds to 54% win probability. So if two equally strong players played a game with 5.5 komi, black would be expected to win something like 54% of games.

There’s some more considerations in the about komi section.

The same thing but for worldwide pros (Japan, China, Korea, Taiwan, no Euro pros). This is a separate rating, and it’s not comparable to Japanese-only values. The rating goes only until 1990 into the past.

On the first page it’s Japanese players against foreign players for each of 2017, 2018, 2019, 2020 years. Nothing interesting there except that since international matches are rarer, the graphs are less pretty.

I like how there’re so many Korean games the graph is very smooth. But I couldn’t help but notice the shape of experimental values doesn’t exactly match up, it looks more linear. 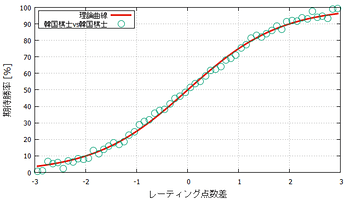 This section outlines the rating system. Main points are:

A large section dedicated to the estimating the strength of the characters. This is the biggest section on the website, and maybe deserves a separate translation by someone who knows about it.

How strong was Satan (Honinbo Shusaku) in the Edo period in modern times?

The Firefox browser extension “Translate Web Pages” can be added. This then automatically translates the whole site in-place (using Google translate under-the-hood), which makes it not so bad.

However, as noted, some names and words are not well translated, e.g.

it translates “Sai” as “Satan”

Still, cool lists and thanks @S_Alexander for sharing