Page views for the Wikipedia article Go (game) http://en.wikipedia.org/wiki/Go_(game), as shown on https://tools.wmflabs.org/pageviews/#project=en.wikipedia.org&platform=all-access&agent=user&start=2015-08-01&end=2016-04-10&pages=Go_(game)

First spike is after the news was out about the AlphaGo/Fan Hui games, second spike of course during the DeepMind Challenge AlphaGo vs. Lee Sedol. 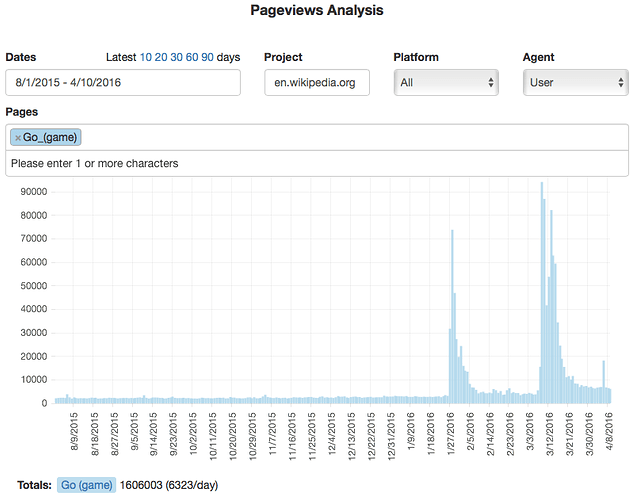 Thank you trohde for this interesting info.
What stands out in my view is the level of consistent pageview after removing peaks and bulges. It could be described as “the baseline” from which peaks and troughs move off.

You have to keep in mind I’m not thouis

, and the trailing off period may not be over after the Lee Sedol games, but it could mean there has been over 120% increase in the general level of interest on Go in the world (with a bias towards English-speakers).

Yes, and since the DeepMind team will be at the US Go Congress 2016 and since most probably there will be more games later this year (Ke Jie?), I expect this baseline to rise to ~10K (or even more) views by mid-next year.

, and the trailing off period may not be over after the Lee Sedol games

The trailing off after the Lee Sedol vs. Alpha Go match looks pretty smooth. Seems like we could find a function which approximates its behavior and extropolate to predict what the new baseline will be, no?

Yeah, we need thouis for that!

I agree that the “new baseline” is of great interest. Here’s an update showing monthly views, from the day that the Ke Jie matches finished 2017-05-27. 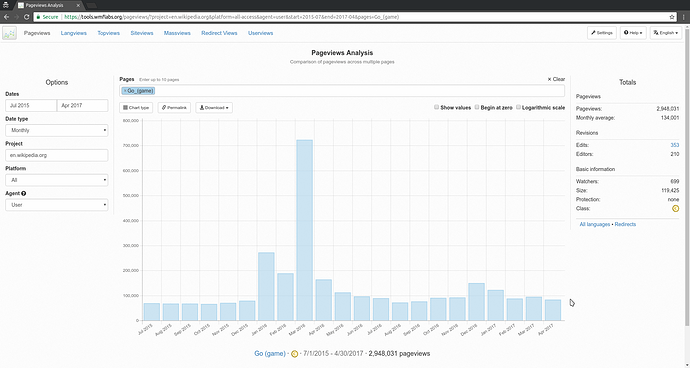 We see that typical monthly page views are bouncing around between 70000 and 100000 (2400 and 3200/day), with some spikes above that in Dec and Jan, probably based on the “master” series. It will again be interesting to follow up in a few more months.

Thanks for reviving this thread … 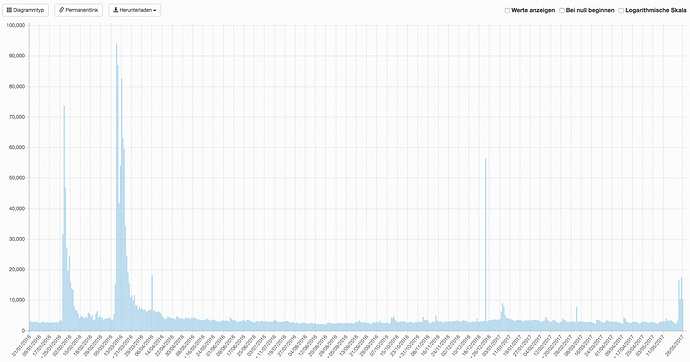 Some interesting spikes here, I guess there will be a few more in the next few days/weeks.

Indeed - it was taken on that day, but did not include that day since it was monthly. Here is all the monthly data now available, including all of May. So we see a modest increase in May, about equal to December 2016, but only about 21% of the peak back in March 2016. The daily views in June returned to about the recent baseline. 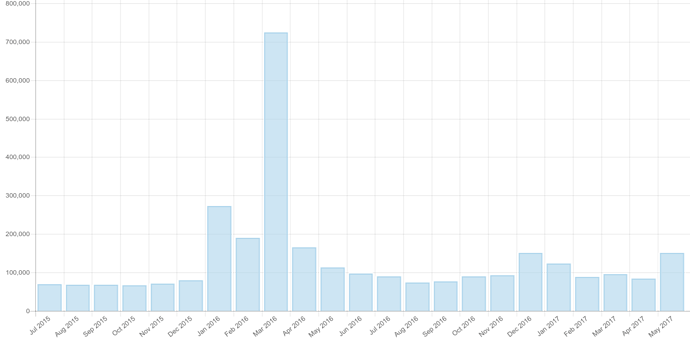