We now have the ability to add private “Player Notes” about players on OGS. 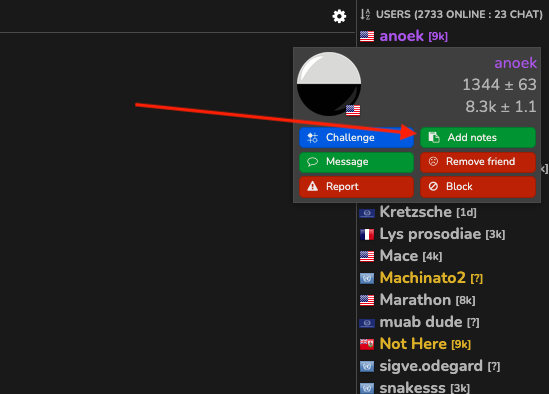 It opens a dialog where you can see/edit the notes:

If you’ve already made notes for a player, you can tell because it doesn’t say “Add Notes”, it says “Player notes”: 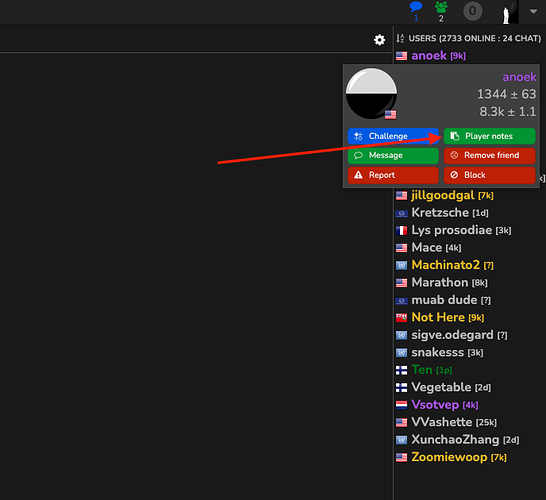 You can also see you have given a person notes in the friends list: 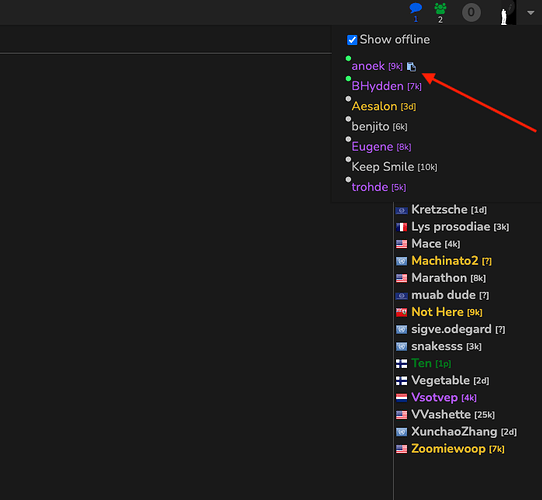 And you can click on that icon to open the notes:

This is a small kind of feature in some ways, but it is build on a whole new capability introduced by @anoek . (“server based key-value-pair-data-storage-API”). So it may have a few teething problems.

Another feature introduced, based on this capability, is that your theme choice will sync between devices.

(We are braced for “what if I want different themes on different devices” … it’s in the cross-that-bridge-when-we-come-to-it basket).

This is awesome. Useful for noting why you have ‘Blocked’ someone amongst other uses. Thankyou @GreenAsJade

This also addresses the “show my W / L against a player without having to visit their profile page” request, since one can write the W / L against frequent or important opponents in the notes if desired.

Another use relates to the issue of friend clutter discussed in Negative imagery on the unfriend button?: any new members of the friends list can be tagged with the reason for their addition.

I never felt the need for “player notes”, but I know that someone does and I’m happy that this feature is now available.

I’m very much interested in the second topic that @GreenAsJade was trying to throw in unnoticed.

your theme choice will sync between devices.

Well - one might say - why don’t you use Chrome instead?
I could.
Fact is that dark theme on Chrome is brighter than “darkened light theme” on Samsung browser and i actually like the latter.

I’m probably the only one user in that basket, so I should just resign myself to that.
But I changed the title, so that any other user interested in that could find it.

Theme Sync is not a big deal, everyone can chose a theme once for each terminal. Not something you are going to investigate for days. @Lys concern seems completely legit to me.

Hmm? Why? I thought I said “we’ll cross that bridge when we come to it”, not “we’ll ignore this problem”

Theme Sync is not a big deal, everyone can chose a theme once for each terminal. Not something you are going to investigate for days

Yes, I wasn’t “hiding” it, I just wasn’t making a big deal about it, because it is not really much of a “feature”. In fact, it was mostly an experiment that tests the new capability, and flushes out the next inevitable question: “how do users control these new features (if indeed they can)?”

My reaction was exaggerated for artistic purposes.

I don’t know how many OGS users could be using Samsung browser on their phone, associated with dark theme. Not many I suppose.
So I think just have to find my way to deal with it.

Maybe in the short term, but ultimately I think there will be no avoiding this sort of question.

(Also, arguably, this feature probably should be turned off, since as Groin says it’s not really high value-add, it’s just nice-because-we-can