After playing handicap series on OGS I decided to play on Foxy and share this here. After all it’s less fun if no one knows about your adventures.

Starting out with clean 5d account I matched using quick match feature. Whoever the system gives I play. No tricks like picking opponents. The only trick is playing long time control, 20m+3x1m. Foxes favor quick play to have you miss things. Which is what we’re gonna avoid.

I secretly hoped to get promoted to 6d, it’s at least somewhat respected rank compared to 5d which is meh on Foxy. But didn’t work.

Foxy uses sliding window for promotion and demotion. To rank up you need to win 15 games in the last 20, and to demote you need 13 losses (numbers are different at different levels). Thus the bars are at 75% and 35% winrate. I think these numbers are similar to OGS.

Here’s a graph I made for my series. Green are wins, red are losses, green wants to reach promotion bar, red wants to reach demotion bar. As you can see I had a good pace then started chocking and tilting and fell down to 4d where with relative ease I climbed back. 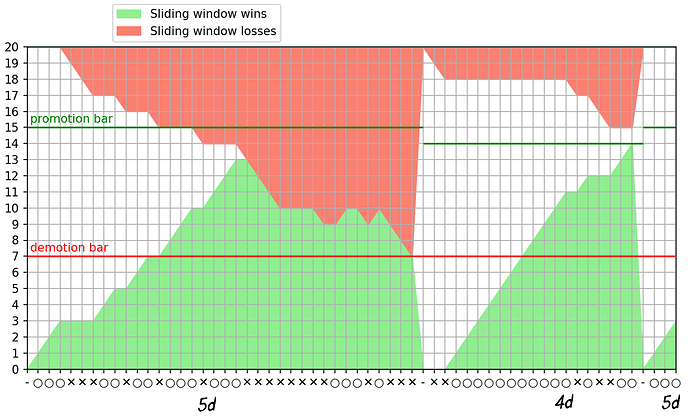 Interestingly I got demoted when I had overall winrate around 50% but just in the last 20 games I had 13 losses. Which makes me think, even if you’re true 5d with 50% winrate it’s not unreasonable to lose 13 out of 20. In fact it appears with true 50% winrate you’re still gonna rank up/down on average after ~52 games (median 40) and in one fifth of those it’s gonna be promotion just by luck. It can’t be helped, one rank difference is very small in terms of winrate. But at least on OGS you can gain back your rank very quickly, in one game basically. On Foxy you’ll have to bag like 20 opponents at the lower rank to fix things. Since it’s so annoying some players seem to shop for opponents, at 4d I often got cancelled because I had good results.

Additionally we might look at the opponents. Only for 5d rank because 4d is boring. I selected 5 categories. Stable 5ds are those who’s played 20 games at least without promotion/demotion. If they have less than 20 then they’re recently promoted from 4d or demoted from 6d. Foxy also allows no komi games one rank up or down. 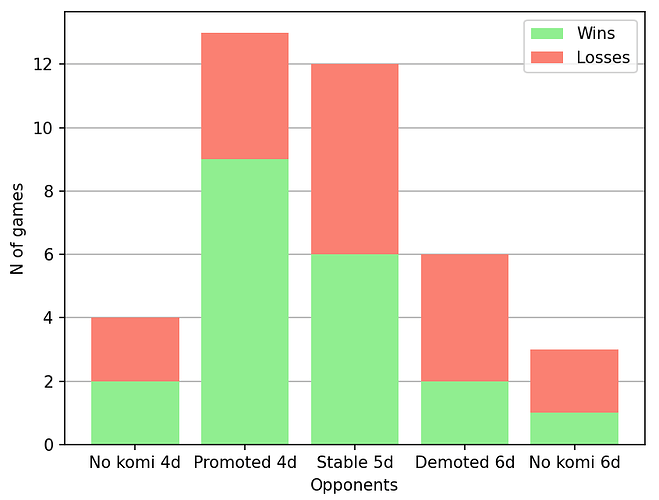 As you can see, there’s a lot of people promoted from 4d, that’s probably people oscillating from 4d to 5d and back. So it makes sense to have higher standard to promote than to demote.

In terms of games, Foxy players are tenacious as hell. They die easily but they also kill easily. And even if you kill them somewhere they entirely can kill you back somewhere else. You need to have full focus. Joseki knowledge seems rather important because it gives you some opportunities to get a good result. And on the other hand if you do mess up joseki it can be hard to recover. But most importantly they make easy mistakes all the time and this is where we can take advantage.

How does these win loss series make any sense?

Aren’t humans really bad at judging what is random? Especially that things that are random might often not look random?