Please don't have bot resign when playing against 20k+

I want to ask the admin of amybot-beginner to configure it to avoid resignations.

But I guess this small request is also valid for humans.

In this level (I believe more than 20k), it is important to learn the end game, but when Amybot (or a human) resigns, the end game is never reached.

For some people “it is obvious” who is winning, but if you are studying the endgame, life/death, how to make your group stronger, how to avoid or defend an invasion, etc., it is important to see the techniques played out on the board.

You would be surprised how often you could win against me instead of assuming it is an “obvious end game”.

For that reason I’m not playing so much here in the site, but I’m using more the “Leela” program. Because I can use this configuration: 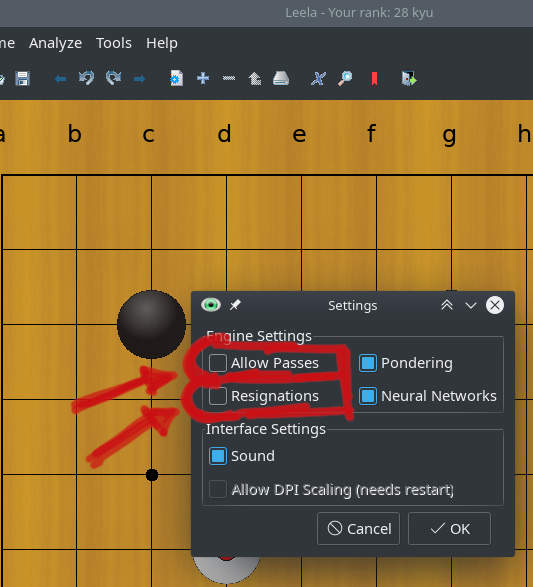 With that I can disable “pass” and “resign”. The software then will play until the very last drop of blood! It is amazing how much we can learn from that configuration.

PS. Edited: but I would prefer to play here online instead of the software, so my history is saved, I can use the analysis and the game will be available for me in the future when I want to compare my evolution.

Have you considered playing against human opponents? Bots, especially Amybot, won’t help you learn the game that well.

Viewed from the other side, it is extremely annoying to play against a bot that does not recognise it has lost the game. This costs the admins a lot of time as well, since they are the ones who will have to end the game in those cases.

Also, if you have the problem that amybot resigns too quickly, you should play a stronger opponent instead.

Note, although the responses here are not that enthusiastic, you are in fact able to ask the administrator of amy-bot yourself.

You can PM that person by going to the page of the bot (which you linked) and clicking on the “Administrator”.

I’d wager that what you’re asking for is easier said than done.

I concur with the other responses. Play against a stronger bot or a human. Amybot-beginner probably is doing you any favors anyway. Beginner bots reinforce bad habits

I find I’m annoying someone if I keep playing while they keep passing.

One day I pass as soon as the opponent passed, just to realize in the analysis that the game was not yet defined.

I don’t like to play against humans that can accuse me of bad behavior, cheating, patzy, annoying, and all kinds of human-related-feelings that the opponent can’t hold for himself and wants to externalize. Of course, when I will be stronger, I would understand when to end the game. But for now, I rather play with bots and avoid the heat altogether.

(If you do not mind my mistakes, please drop me a message so I can challenge you knowing that you understood this small disclaimer and just like the fun of the game no matter what)

I don’t like to play against humans that can accuse me of bad behavior, cheating, patzy, annoying, and all kinds of human-related-feelings that the opponent can’t hold for himself and wants to externalize. Of course, when I will be stronger, I would understand when to end the game. But for now, I rather play with bots and avoid the heat altogether.

Most people aren’t going to expect a 25-kyu player to know when the game is over. If they’re also around that same level, they probably don’t know either.

You need to play out lost scenarios to see for yourself what works and what doesn’t.

Those “maybe I can live / maybe I can’t” life-and-death problems are never going to go away as you get stronger. The problems just get harder. I can watch a 25-kyu player make ridiculous moves, but I always keep in mind that when a dan players watches my games they’re seeing exactly the same thing.

When people talk about “OMG just resign already” they’re usually referring to people who are genuinely abusing the game. Playing every possible empty space whether it lives or not to keep the clock moving. They’re not worried about newbies exploring corner invasions to see what happens. Some of the AI’s have fallen into this behavior of paving the board with dead stones and making the game drag on forever.

I would encourage you to play against people. You’ll run into jerks, but mostly the opposite. I’ve found many people on this site who I enjoy playing against, and very very few who I don’t.

If you’d like a teaching game, and you don’t mind correspondence speeds I’d be happy to play against you.

@Bray - keeping on playing in an obviously lost game is exactly the sort of thing that I was trying to avoid. So that’s why amybot resigns somewhat aggressively (yet if it is very confused, it sometimes still keeps on playing when the game is clearly lost).

I think on 9x9 games or games close to the end anyway, it can be a bit silly to resign. And especially, if it is not extremely clear as to why (like some important stones being taken).

The resignation currently happens on an evaluation threshold being met. I wonder if I could add a move counter to it as well - as in “< 5% win chance for the last 5 moves” - that would limit the worst eye-filling but maybe would allow the desperate situation to become more clear (or even, let the game finish).

But that would require some extra coding indeed…

The resignation currently happens on an evaluation threshold being met. I wonder if I could add a move counter to it as well - as in “< 5% win chance for the last 5 moves” - that would limit the worst eye-filling but maybe would allow the desperate situation to become more clear (or even, let the game finish).

Perhaps also a minimal number of moves it plays? I can imagine a bot making a huge mistake in opening, dropping below 5% winrate and resign before the 50th move, while on 19x19 it should really see what happens until at least move 150, especially at DDK level.

I understand the idea behind pushing forward to practice end game… But at a certain point if you cannot make it to end game
a.)Just practice your open. You are literally not able to do a successful opening again amybot beginner… Seriously, you don’t need to expand the list of things to practice. You don’t need to work on your counting, or the shuttle optimization of points, specific ways to maintain sente… Whatever… You need the most basics of creating eyes and not dying. At the point where you are now beating amybot so bad IT doesn’t want to end game… Yeah stop playing the words worst bot and pretending your learning.
b.) If the game is so lost… What are you practicing by forcing an end game? Particularly with how bots make decisions, when there is no longer viable moves you are not going to get some sane end game. Look at any analysis of a heavily lost game, eventually the AI starts considering all moves equal because there isn’t a move. What is gained by forcing this? You will learn how to play end game vs a mental patient and likely do worse in a close game.

What good habits can a bot teach if it has a TPK rank?

Weak bots can teach bad habits and reinforce faulty intuition, since they play atrocious moves and will repeatedly make the same mistakes game after game.

A human player will eventually learn to exploit the weaknesses of the bot, and find moves that capitalize on those predictable mistakes. However, such moves that work against the bot might not actually work against other competent players, i.e., these moves are really anti-tesuji that only work against weak players that predictably fall in the same traps over and over again. Thus, one would be learning and reinforcing incorrect play by spending too much time with a weak bot. Further, such misguided learning might come along with the illusion of progress as one only gets stronger against that bot, but not necessarily against other human players.

I find it very useful to play against bots in addition to playing against humans. I treat them mostly as random opponents when I don’t want in fact to face human opponents. I’m pretty sure statistically it matters as much as erratic humans with the added bonus that Amy greets politely twice.

@drbeco, I’ll be happy to play a correspondence teaching game with you. Pick whatever time settings and other parameters you prefer. Just make sure that it is unranked and correspondence, and send me a challenge.

In general, I found that it is quite easy to find teaching games via the forums:
#teaching:teaching-games

I’ve observed quite a few amybot games. I’d assert the 25k opponents it plays can teach you plenty of “bad habits”, too.

Most of the opponents amybot plays have trouble with basic direction and basic shape. You can definitely learn to beat it consistently but I don’t see it making types of mistakes her opponents never do.

At this level of play, any practice is going to give you valuable experience.

Though sure, playing different opponents is always better than only playing a single opponent.

it is important to learn the end game,

I played few games against amybot DDK and it has very big issues on life and death which can completely destroy endgame. Self-atari, not recognizing atari, missing vital points and so on.
If you want to practice endgame amybot ddk is the wrong way.
I never played with amybot beginner, but probably it’s even worse.