I had an idea a while ago for a very simple variant.

Consider this position and sequence, for instance. 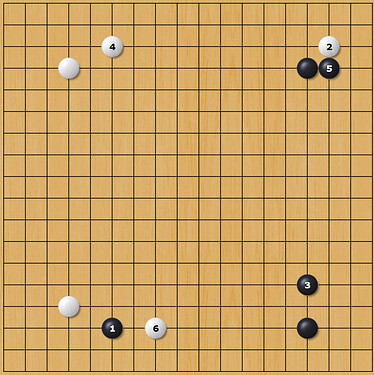 At the start of the position, there’s one stone in each corner, so any quarter can be played in.

(1) adds a stone to the lower left. It can no longer be played in until the three other quarters also have two stones, so White can’t respond to the approach.

(2) adds a stone to the top right. Black can’t continue the joseki yet.

(4) can only be played in the top left, since all other quarters have two stones.

(5) can again be played anywhere, as there are now two stones in each quarter. Black continues the joseki in the top right.

(6) pincers in the lower left. Black can’t yet do anything about this and must choose between enhancing his shimari in the lower right into a three-stone formation and shoulderhitting White’s in the top left. White will then have to play in the quarter that remains.

I think that Black’s advantage is larger than in standard Go, since he has the 4-quarter and 2-quarter choices in each cycle whereas White has the 3-quarter and 1-quarter ones.

So, I have a second suggestion that just came to me: Thue-Morse Quartered Go!

Thus the quarterly fairness in an infinite sum is 2 / 3 = 0.666…, and the longer the captureless game the more QF will converge on that value.

According to the On-Line Encyclopedia of Integer Sequences, this is the pattern for the first 64 moves, if we consider 0 as Black and 1 as White.

So, there is essentially no quarterly unfairness in Thue-Morse quartered Go.

[In] a book [by[ Mizokami Tomochika … he argued that by splitting the board in half and counting the stones in each half you could (indeed should) choose your move on the basis of which side had a preponderance of stones in that area.

Sounds like an interesting challenge, if he take the meaning as a suggestion to always play on the half with least stones.