Several times now i have played a question mark person and just been obliterated.

I don’t like to play question-mark people who are vastly better than me because it is very difficult to learn anything from what they are doing, and it’s probably boring for them.

It defeats the purpose of me trying to limit ranks I play against by +/- 5 kyu or whatever.

Also, the question mark games are being shown as ranked. for example.

Both were against question-mark people who were vastly more skilled than me and both are shown as ranked losses. According to past posts on this forum, question mark games didn’t used to be ranked.

and/or 2. If i am 19 kyu and I choose +/- 3 kyu as my opponents, then question mark people should not be matched against me. Maybe there could be a separate box for ? rank games.

and/or 3. question mark people should have to play a few games against robots before they play humans so they will be in the correct ball-park of skill level.

The question mark rank means they’re provisional, and haven’t played enough games yet to establish a rating. This usually only takes them a few games, but until then, the system can’t really know if they’re a 25k or a 7d. It’s unfortunate, and would be nice if these players had selected challenges closer to their rank (which they probably have an idea of) but the games need to be ranked for them to begin establishing a rank.

I don’t remember clearly how it used to be, but I think it was something like the games only affecting the rank of the provisional player. However, as I understand it, this isn’t an option with the newer algorithm without breaking ratings as a whole.

I would expect most people restrict rank, and blocking provisional players from these games will make it waaaay harder for them to find a game - not a great experience, especially for someone new to the server.

Many provisional players do, in fact, play rated games against bots to establish a rating, but I don’t think it’s a good idea to force this as it can be a difficult introductory experience for brand new players.

Now, one thing you can do is ask provisional players their estimated ronk/how long they’ve been playing before you start the game. The reason that you can cancel without penalty (the game is annulled) before playing a move is that the player who made the game should have the same opportunity to vet their opponent as someone accepting a game. So, if you encounter someone who is vastly stronger, you could politely explain that you’re looking for games closer to your level and don’t expect that either of you we’ould get much out of the game, then cancel it.

If you feel overwhelmed it’s your right to resign. No shame. Let someone confirm that these games don’t affect your rating.
Some players start playing a bot, some don’t. Bots are not tasty for everyone and everyone has to start somewhere.
Hope this will make you having more fun on OGS.

Newcomer set their starting rank so it’s your right too to report someone not playing at his level. Then an admin will have a look and check if there is no sandbagging around here.

Noooo no no, this is not true. All ratings start off at ~13k by default and rapidly adjust as games are played. You cannot select a starting rank since the advent of Glicko2.

Aaah changed… Ok my bad. I edited, thanks

It’s as @polar-bear stated: the question marks are provisional players of whom the system has no idea how strong they are. The only way we can learn this, is by letting them play ranked games. Usually they’ll become a certain rank after 5 to 10 games.

The good news, is that losing a game against a provisional player will affect their rank by a lot, while it will affect your (established) rank by a little: our ranking system takes both history and uncertainty into account, thus if a [?] player turns out to be a 5k after a few games, your ranked loss will barely count against you.

You are allowed to cancel games against players you don’t wish to play, but it’s preferable to actually give the provisional players a chance to get a rank.

Noooo no no, this is not true. All ratings start off at ~13k by default and rapidly adjust as games are played. You cannot select a starting rank since the advent of Glicko2.

This isn’t completely true either: they start off at 13k, but the system will treat them like 19k (humble rank) for finding an automatic challenger. I believe the idea is that a 19k playing a provisional 5k is less bad than a 5k playing a provisional 19k. We had a lot of complaints when the provisional players would start at 13k, since the 13k’s would have to play so many complete beginners (as well as occasional strong players). This complaint is essentially what the OP asks, but the complaint has also become a lot less frequent.

First of all, welcome to OGS. Hope you enjoy your stay.

You don’t have to play against provisional players. Some players flatly refuse to do so (probably for the same reasons you mentioned).
There is a possibility to play games with a handicap.

In quick match finder you can arrange it so that you prefer to play games with a handicap. 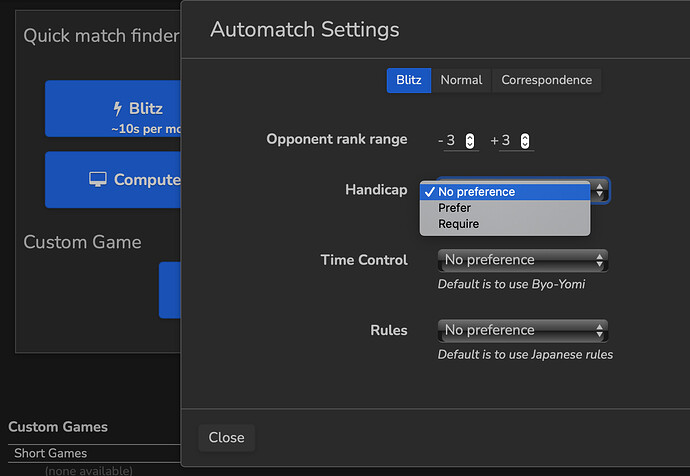 If you search for games via Custom Games or Long Games you can chose only to play against opponents that use Handicap = Automatic.

If you set up a custom game you can set Handicap to Automatic. 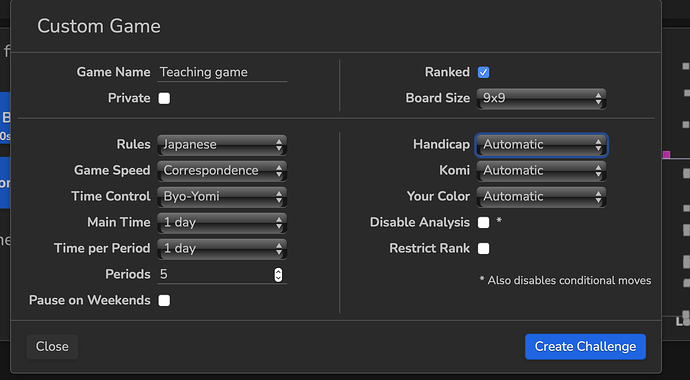 thanks all, i understand it better now.

Such AI may be under development, but I’m not aware that it’s publicly available.

I guess that you’ll need a lot of high quality data to train such an AI and such data may be hard to come by at the lower skill levels.

So for the time being, human players/teachers are probably your best bet to make such an asessment. But the accuracy of their assessment will depend a lot on how large the gap is between the players. If there is a large gap, the assessment will be less accurate.

I would think the most accurate and easiest rank asessment for provisional players is to ask players their rank when they register on OGS. But OGS scrapped self-declared ranks when switching to glicko2 (see @polar-bear’s post from a day ago).