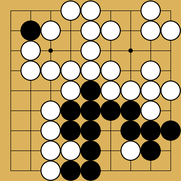 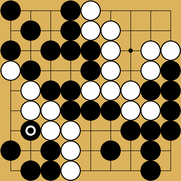 I’m not an expert but understand that the algorithm looks back over your last 30 games and recalculates each time you finish a game. So if your opponents from previous games got stronger you can gain more points for old won games than you lost losing more recent games and so go up despite losing recently. Someone who knows how this works in detail can give a better answer but that’s my interpretation.
Likewise you can drop after winning a game.
I’d say don’t worry about it and keep playing!

Yes like this, the tally is your last 15 ranked games, or if you have played less than 15 ranked games in past 30 days, it just uses those.
Each time you finish a game, the system takes a look on your last 15 games, have you won or lost and also the current rating of those opponents, and then it re-calculates your rating based on those 15 games.

So most likely you have won or lost again someone (or multiple someones), who currently has higher rating than when your last rating was calculated, so your wins against them give you more rating points than they did initially, or your losses against them won’t reduce your points as much, since it’s only expected that you lose against stronger players.