Had quite a few of these games recently where it comes down to an all or nothing on a single group and I hate playing this kind of game - any tips on how to avoid it as well as a general critique (I’ve been playing really badly recently I feel) would be appreciated.

These sorts of games tend to happen when you give yourself weak groups. In this game, you tried to kill a single stone in the mid game (at the top), got split, and ended up in a huge fight with weak groups everywhere. Then you gave yourself another weak group at the bottom. Finally, you got cut as part of the fight in the middle, while preventing your opponent from getting an eye, got yet another weak group, which then died.

At the end of the game, I count 6 different groups on the board for you. Any time you’ve got that many things to look after, things will tend to die. Focus on being connected and being strong. Even if you end up fighting (you likely will, when others overplay), you’ll be fighting from a position of strength, instead of rolling the dice on weak groups vs. weak groups and hoping the numbers come up in your favor.

Just to be specific, two weak groups is considered trouble. 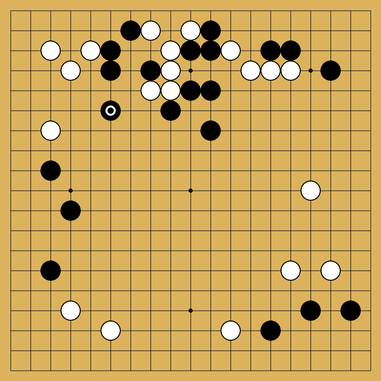 
reviewed the first 50 moves
around move 30ish you get split into 2, while 1 is clearly strong(right side linked to corner)
you goal is settle the weak group, yet you seem to ignore your weaker group…which is very dangerous when facing the risk of being surrounded on all sides

overall, your judgement of your group statuses is lacking
weak groups you either sacrifice them or you make them alive
the same goes for your opponent if your opponent doesn’t help his weak groups, you attack it while profiting from territory/influence gained from attacking or just killing the group if you have enough support