I got up to 16kyu at one point and i was able to see where i had made mistakes in my games in the past. Now Ive dropped down to 19/20kyu and cant see where im making such big mistakes/ lossing by so many points to players who i could have beaten or at least held my own at one point. What is the major common mistake i am making in these games to where im getting obliterated. Not sure if its a problem of concentration, im distracted or frustrated by something else subconsciously or what, but its bothering me that i cant see what the problems in these games are and that im losing so badly. Please review. Thanks 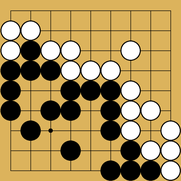 o00o00o vs. Bruce the Beefless 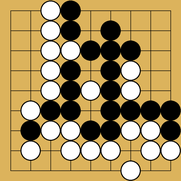 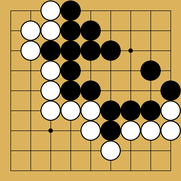 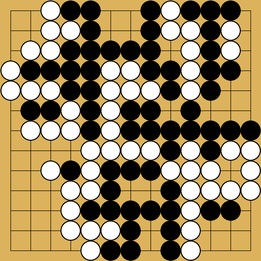 Just glancing over your games I notice two things:

I am a kyu too, so don’t take what I said for granted. Maybe you want to ask someone for a teaching game?
(Feel free to send me a challenge, but as I said, I am a kyu myself, and also started playing only recently.)

I’m not a player who plays a lot of 9 x 9 so I’m not that hip with its metagame, but I have a few comments, just one per game to keep things light (and because I genuinely only have one comment for some of them since you otherwise played well.)

Game 1: On move 25, G3 is a lot better than F4 because it secures you the territory in the corner.

Game 2: One move 15, F2 is the proper shape to stop White incursing into your territory. See senseis.xmp.net/?LionsMouth

Game 3: On move 9, E9 is bad shape because White can later play E7 or E6 and look at making or threatening to make cuts or ataris. The proper shape here is E7: there are no cuts or ataris in that shape, and you have a follow-up move at C7 later to capture the White stone if he tenukis.

Game 4: On move 11, you can push further, to D3. It’s White’s fault for playing F2 in the first place, which was a bad move. D3 would keep White’s stones split and move into his corner to destroy his territory. In contrast, G2 didn’t help you that much as after White connected, you still had a cut in your shape at G3.

On a brief look, you make lots of overly defensive moves, which lets your opponent reduce you.

Game 1, move 3: you just got attached to, and instead of playing a hane or something to attack your opponent, you pull back and let them do what they want. Push instead.

Game 2, move 15: you connect up instead of playing the hane, which gives your opponent room to push along the side. Review: https://online-go.com/review/303845

It’s rare to see you lose any stones in your games, because you’re so defensive. You tend to turtle up when you get attacked, instead of counterattacking, which leaves you open to reductions.

Many of the attacks you’re facing also have defenses which would be sente for you. The hane in game 2, for example, threatens to crash into your opponent’s territory by atariing the lone stone on the side. Yes, your opponent can peep and invade and fight, but 9x9 is all about tesuji and fighting. It’s better to fight for a winning position than to retreat into a losing one.

I appreciate everyone taking their time out to look at these games. I think I ultimately need to take a short break to clear out the brain fog then come back. I looked over some old tsumego problems that i was able to get through quickly and efficiently some time ago, but now its a blur looking at them.