Hello everyone, I’m reviewing a game I just played with the help of katago (เล่นกันสนุก ๆ) but I’d really love a more human opinion.

As often happens in my games I did decently up until the midgame then I squandered any advantage I might have gained in a few moves. On this specific occasion the trainwreck happened around move 78 , I left a couple comments about that.

Is it a private game?

Oh sorry I guess that’s possible, I’m not the one who created it

I gave access to you and the entire ‘Teaching league’ group, I don’t know if it’s possible to give access to everyone but that should be pretty inclusive…

In any case here’s the sgf

You can upload it to your personal library.
On a public folder. 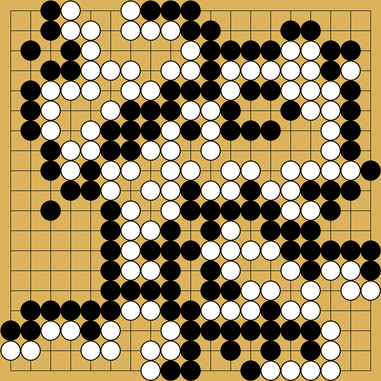 Thank you for the info

At move 68, you decided to add a stone to your sansan invasion, to avoid Black pressing down on your stones. 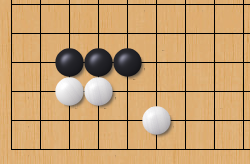 You played a keima:

But this keima leaves a huge weakness, which Black can exploit for instance like this: 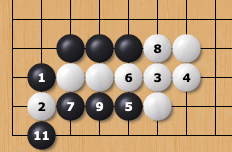 So, instead of playing the keima, it’s better to play a more solid move. The kosumi:

This is a very big move. In fact I think you could have played it much earlier in the game: 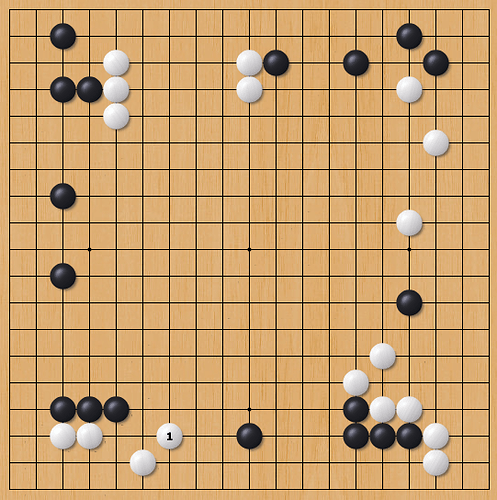 On this specific occasion the trainwreck happened around move 78 , I left a couple comments about that.

The sequence you played starting at move 78 looks like a ladder:

Except black has liberties. Thus it’s not a ladder. If a sequence looks like a ladder, but your opponent has liberties, then it’s probably a very bad sequence. Black is pushing left and right and tearing your stones apart. You are trying to block on both fronts (2,4,8 and 6,10,12); this means that for every move that black plays, you need to play two moves. This can’t work. In particular the empty triangle shape formed with move 8 is awful. It creates a shortage of liberties. Sooner or later black is going to play the hane at K18 and you won’t have a good answer.

This all started because you played this contact move:

Here is a simple way to know when to play this king of contact move:

Never ever play this kind of contact move, unless you’ve read the whole sequence that follows and you are absolutely sure the sequence is good for you.

Playing in contact with the opponent means you will have very few liberties. But Black is going to have liberties, because all of black stones will remain connected in only one chain; whereas you’ll be playing lots of hane on both sides of the black stones, and your shape is going to be torn apart and you will have lots of shortages of liberties.

Leading to this or that much simpler sequence:

Note that you played the same kind of sequence at move 104:

Again, it would have been simpler to pull back and avoid contact: