Hello ! Would someone review this game please ? 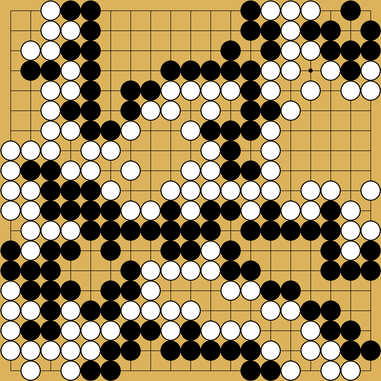 I didn’t do stupid mistakes in this game (except for the left group at the end where i didn’t cover properly (or i didn’t see them)), so i wonder what are the reasons for my defeat.

I couldn’t find any bad weaknesses in the first 50 moves. So good job there!

I’d start with moves 57 and 59. A Go proverb says “Don’t attach against weak stones.” (See Opening Theory Made Easy by Hideo Otake for a whole chapter on the subject.) In short, contact moves help the enemy get stronger. So you should attach against an enemy stone when you have a weak group, but not when attacking. In the game, attaching not only strengthened the weak white stone, it smothered your 4-4 stone and reduced its value. I’d have defended the 4-4 stone instead, with a small or large enclosure.

Moves 71 was also problematic. It should be at S15 or R14 to avoid getting sealed in. You may be underestimating the value of not getting sealed in. There’s so much value in sealing in an enemy group. You develop major influence that way, and in the game your opponent also developed major territory. This is a recurring theme in Hideo Otake’s book, so I’d recommend you buy and read it just to be sure you’re not missing out on other basics.

The sequence from 81 to 89 also did you no favors. Like the earlier attach-and-crosscut, it strengthened White’s area, converting it into territory, and then you were behind. Instead of all that, you had a peep at R14 and a shoulder hit at Q11. Even invading directly at R12 doesn’t look bad compared to giving White all that territory.

Thanks a lot !
I believe i heard about the “Don’t attach against weak stones” proverb, but i should try to really apply it now.
I didn’t hear about the sealed in think though, i think i will try to get this book and read it. Thanks for the recommendation !