Hi, I’d really appreciate a review of the following game. 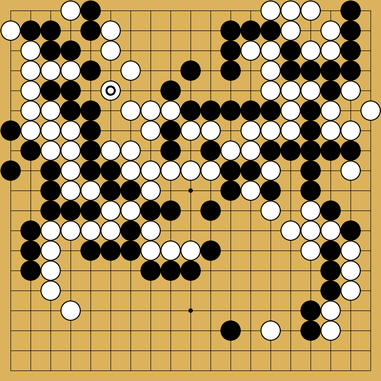 I started playing go in mid September last year and after losing a ton of games this was one of the first correspondence games I started once I felt I had some idea of what was going on. I was about 22/23k when the game started and I’ve improved a lot since then and I can see some really obvious mistakes especially early in the game but for much of the game I was very unclear on if I had caught up or if I was still way behind.

My opponent is 20k now but was 15k recently and just resigned a bunch of games. I won the game, but I think my opponent resigned too early. In the final position I am not even sure I am ahead. As far as I can tell he has sente and can give up on the top left and try to take a bunch of the bottom and the game could be quite close. I know it’s generally better to request a review of a game you lost but I feel like this was a complicated game with lots for me to learn from.

No time for a full review but I’ve posted a few comments. If I was playing someone my level in this position, I’m not sure I could win. If I considered my opponent to be 10 stones stronger, I’m pretty sure I couldn’t.

Of course if it was me I would fight it out, but w has a pretty solid lead and no weak groups.

I’ll drop by later to see if someone else has reviewed the game. Top right for example you could’ve killed b early already…

The game basically revolved around a few huge fights, and your opponent made more mistakes than you did. I think losing the dragon on the left, while letting you save your middle group, more or less lost the game.

That being said, I think your opponent definitely had opportunities to save the dragon, and probably win the game in doing so. In general, you tend to dive into some less than important fights, instead of making territory, which is probably a decent description of most kyu-level games (including most of my own.) Running weak groups across the board is almost always a bad idea. A good example of this is the two-stone group you ran into the middle at the start of the game. It wasn’t really important, and it didn’t make any territory, and it allowed your opponent to strengthen everything around it.

The biggest improvement you could make would be to look for big points on the board, and try to make territory, instead of fighting with weak groups. If you see a weak group, and you can either definitely kill it, or else profit from pushing it around, go ahead and attack. Otherwise, look for more important moves to make.

Also thanks you smurph for your comments also. I really appreciate your taking the time.