I played white. I’m specifically interested in what to play for move 34, where I’m concerned about my groups on the right 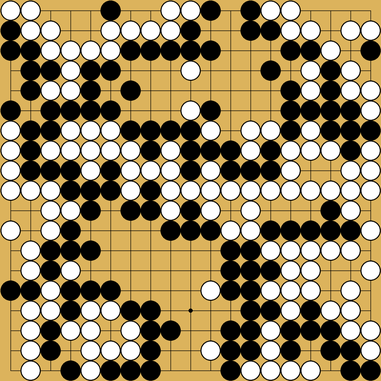 Your two right side groups are weak, but Q8 and R9 are also weak. Trying to connect your weak groups is imo a good option.

Your nobi at P10 is way too slow. You could play a tobi at O10 instead, it would be “twice as efficient”.

Even better, you could play a kosumi at P9 or a tsuke at P8.

In the game you neglected your P5 group of stones. Both black and white played lots of move on other parts of the board. But taking care of the P5 group is urgent. You came back to try to save it at move 88. That’s too late. Pretty much every move that was played elsewhere on the board, between move 34 and move 88, was not urgent at all. Black could have killed the P5 group at any time by playing an enclosing move such as N6: 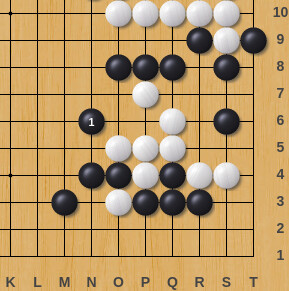 So, coming back to move 34, you have to ask yourself: who is weak? Is it the two black stones at R9-Q8, or is it the five white stones at P5?

Here I think you can enclose the two black stones with the tsuke at P8: 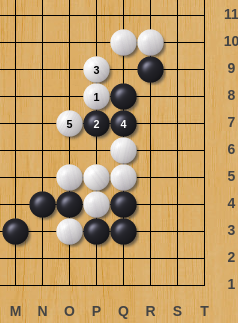 After this, Black is probably going to die; and even if he did find a way to make two eyes, your two groups would be connected and strong.

(I was intrigued by the rectangular-board review request. ​

Thank you! I spent a while playing around with better plays for move 34, and while I came up with some things that were less bad than what I did in game, your line there is way better! I’ll study this more