Please would someone review this game: 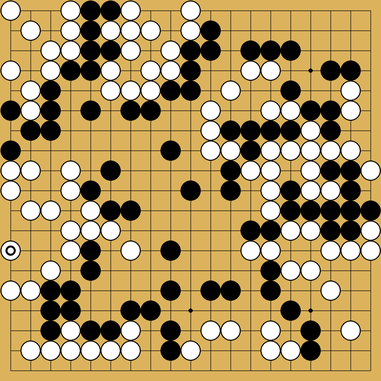 It’s the third loss of the day for me. I think that it should have been possible to kill the group on the right.

I don’t think that I am playing well though.

On game 1, you’re too aggressive and you’re not minding your shape. These things leave your groups weakened and exploitable. (White’s move 48 was a harsh reality check.) The good news is that these are fixable problems, but only if you can see them. So here’s some examples:

Move 11: White settled on the second line—the line of defeat. Be satisfied and play on the left side instead of continuing right away.
Move 13: Just stretch up. You develop more territory from your corner enclosure than White gets. “Hane at the head of two” is only powerful in the abstract, because it takes a liberty. But White already reinforced with R5, so this benefit was minimal and not worth leaving a cut behind.
Move 17: Another bad hane at the head of two. Consider this proverb dead to you. You will know when it’s the right move, since you’re already seeing it. Yet again, stretching out gives you a big territorial gain over White.
Move 19: Kyu players as a group infamously play monkey-see atari. But pros consider this bad style. It’s often better to omit atari, so skip it and play Q9. Better yet, P9, which is the good shape.
Move 27: This left an empty triangle. Try a hanging connection instead.
Move 33: Hane was questionable again because it pushed White closer to your lower group, which is weakening after almost every move, and also because White had a reinforcement at R12. Stretch to P14 instead.
Move 35: Don’t stretch; connect. You’re pushing White into your weakening middle group.
Move 41: I’m not sure what this does. It looks like Black tries to cut, but cutting doesn’t work, so it only strengthened White’s position.
Move 45: Atari and connect overplayed the position. Black wasn’t strong enough to support the severe attack you wanted. My lesson for you is to take care of yourself first, start valuing solid plays more, and accept favorable exchanges without expecting more and more at each turn.

Thanks. I had a review on GoKibitz yesterday where I was told that my moves were too submissive. Perhaps I’m going too far in the other direction.

I tend to concentrate on a couple of issues raised in recent reviews.

I’ll take a break for a couple of hours and then maybe play another game this evening.

That’s the Go tightrope. Avoiding both over-aggression (greed) and submission (taking less than you deserve) takes practice. Ask yourself: how much do I deserve here? What result do I need to feel satisfied? Then pursue it with the moves that seem best to you. It’s not as if there’s a perfect middle ground between aggression and submission. Often the best move is the most aggressive (when your opponent drops their guard, as in boxing) or the most submissive (when you’re the one teetering on the edge of life). Ask the questions, use your best judgment, and I’m sure improvement will follow with practice!

Good advice. I’m not playing enough, so I’m going to play more even if I lose. As you say, it takes practice to improve.

I’m giving up for the day.