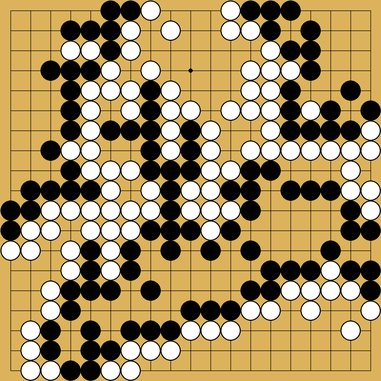 I’m not sure why I lost this game. Could someone give me some pointers?

White was a rock star in the opening, mostly. But you could put what happened after in a go version of a self-help book: “How to Lose a Won Game.”

To manage a lead, play safe and solid moves. When you carry on as if the game were even, you should realize that you are giving the enemy chances to catch up (which happened in the game). Check it out!

Mark, thank you very much!

So I don’t know when I am ahead and that makes me take too many risks. Counting throughout the game seems like a horrible, relentless exercise in mental arithmetic. Is there a way to do this without taking the fun out of playing? Also, how can you do such a thing in a game with 20 min + 5 x 45 sec?

You talked about base making versus building. Can you say some more about that? I get base-making, I think, but what exactly do you mean by building?

(This method was recommended in a book, but I can’t remember which one… Anyone knows?)

@VincentCB, I think it might be attack and defense, but i’m not sure either.

There’s an easy way and a hard way to count. The easy way is to just ask yourself which color you’d rather play. (And how many points would it take to convince you to take the other?) The harder way involves actually counting the spaces. You can use @VincentCB’s comparative method, multiplication, 2’s, etc. (See here for more). I like to imagine a natural endgame and count those points too. But instead of counting over and over (yuck), the key is to keep a running count and update it with new developments.

For the building stuff, I meant framework-building. It’s really the question of when to go for a framework and when to play for territory. Third-line extensions (eg. “base-making” moves) are kind of the default way. But you play high moves when you have potential to develop an area or when the low move looks dumb. In the game, you played a high fifth-line move as if you were building one side of a framework, but black already had a stone on the other side, so white’s potential was already reduced. This is why I would not really think about playing it in my own games.

This post was flagged by the community and is temporarily hidden.