As far as i can tell, my first mistake is somewhere near 55-60 moves, when i started loosing center, but after that i can not specify the mistakes, i can just see, that i started loosing all the whole game. So self reviewing is another skill to learn.

I believe the ogs link is: https://online-go.com/game/12336387 for anyone who doesn’t want to download the game. 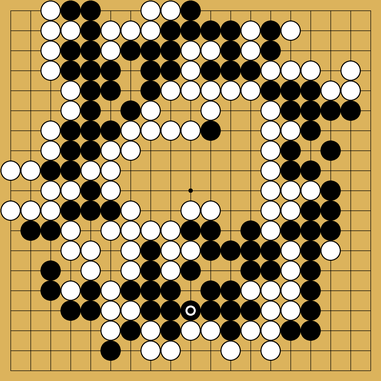 Your first mistake was on move 5: don’t attach to weak stones! In general, you spend too much time trying to attack, and not enough time securing your stones or making territory. Think about which of your groups are alive or not, and if there’s any in the “not” category, attending to them should be your first priority.

You ended up losing the game mostly because you lost the big group on the bottom, which had numerous chances to live. Your opponent won by 52.5 points, and I’m counting 25 stones plus three points of territory that’d have been yours instead of your opponent’s, which comes out to 56 points on its own. If you just do a better job of paying attention to whether your groups are alive, you could easily gain a few stones in strength.

Your first mistake was on move 5: don’t attach to weak stones!

Are you sure? A 3-4 point does not seem “weak” within the meaning of the proverb. (Try attacking one. It’s pretty hard.) If a 3-4 point by itself is really “strong,” it makes some sense to attach and lean against that strength. (Visit https://alphagoteach.deepmind.com and play a 3-4 point–attaching actually gives a better win rate than normal approaches. See also http://josekipedia.com/#path:qd, listing attachment as joseki.)

I guess basically any approach in the opening will see some sort of response, so attaching won’t provoke your opponent into strengthening, in that regard.

Still, it seems like an odd choice on move 5. Alphago Teach doesn’t even give it as a candidate move in the preceding position, and it’s never been played there in a pro game, which makes me suspect as to its suitability outside of specific situations. I’m not entirely sure what those situations are, but I’m not a good enough player to know when this sort of approach might be called for. I see it a lot when players need ko threats early on, or when a player doesn’t want to be pincered, but it also shows up with some regularity on a fairly open board without ko threats. In any case, it’s at the very least far less popular than more conventional approaches, showing up in a mere 400-odd games, as opposed to the 20,000 or so each for the high and low approaches.

A lesser pro played it against Shusaku in this game: http://ps.waltheri.net/database/game/42412/, but they lost, despite a handicap of 2!

@mark5000, when would you recommend playing the attachment, rather than an extension? It feels super awkward to me, but you’re right, of course, that calling it a mistake is a bit harsh. It’s an odd move, and one I wouldn’t personally recommend or play, but not necessarily a mistake.

Thanks for reviewing the game, I am quite new to Go, and have never played 19x19. Four this very interesting and I will pluck up the courage to play on the big board!

when would you recommend playing the attachment, rather than an extension?

You mean attachment vs. approaches, right? I think attaching could work in a really open position. As you say, attaching provokes a response. It seems reasonable to make the opponent choose a response while the direction of play is uncertain. Additionally, it looks like attaching should give one of three positions: (1) normal 3-3 joseki, (2) avalanche joseki, or (3) whatever this is, so you could attach if you like those results.

I can’t tell you that attaching is better than approaching. But I do think pros have overlooked this move until now and that AlphaGo (and LeelaZero) showed us it is actually a valid move choice.