Had a game where I blundered a group of stones in the top right corner but managed to come back and make the game close. However going into the endgame white was up ~12 points and my opponent tried a hail mary pass invading a 3-3 point in my corner. I couldn’t figure out how to kill the group and resigned the game. Can anyone tell me if I had a better response to the 3-3 invasion at move ~200? Thanks in advance! 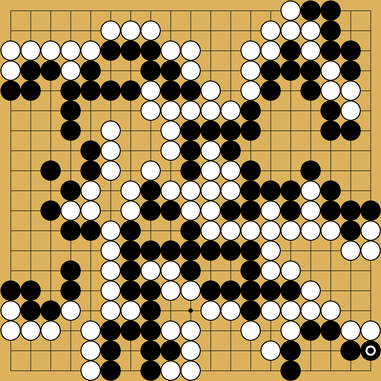 For the invasion, play S4 or Q2. when you’re that strong, locally, you don’t need to worry quite as much about getting cut. The only possible place for your opponent to make eye space is in the corner, so aggressively limiting possible eye space is the way to go. Here, I’d play S4 since the side is stronger than the bottom.

After S4, you want to play for Q2 if it’s reasonable, and S2 in most other situations. If it connects out, your opponent is basically dead, and if you get both S2 and S1, there’s no way to make eyes. Here’s a few variations: 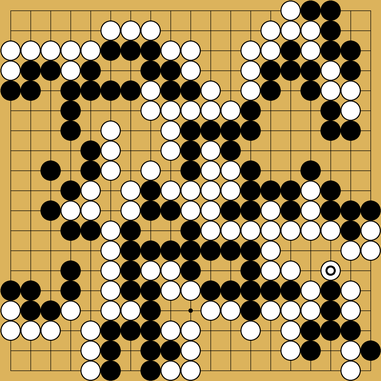 Cheers, thanks so much! Is it worth it in a normal game to spend a move (such as a 3-3 move) to ensure that the opponent cant attempt a dangerous invasion like that? Speaking as a newbie here but also how more advanced players prevent invasions such as these.

If you have a strong group (like in this game), then you can probably throw in behind a 3-3 invasion and kill it off, so a move in defence beforehand is kind of a waste.

On the other hand, if you’re comfortably ahead and don’t have any other major places to play at, why not eh?

It is not unheard of. Not in a situation like in the example, that corner is safe given enough experience…
But if you have enough points to win with a big corner, taking the 3-3 to prevent invasions is possible.

Thanks for the replies, I’ll be more aggressive limiting eye space in the future.

I’ve never seen an example of a pro game where someone spends a move to play 3-3 and defend their corner. Early on in games, it isn’t worth doing because you can usually get a strong group with influence on the sides if your opponent tries to jump into your corner. Later on, once a player does decide to reinforce a corner, it’s usually not with the 3-3 because it’s too slow.

Usually, if someone defends their corner, it’s with a 3-4 or a 3-5 stone in addition to a regular keima or ogeima enclosure. Compared to a 3-3, they give a bit more territory, and are the type of thing a good player can definitely defend, if their opponent tries to invade anyways.

Here’s a game with a good example for the 3-4 extension from the 4-4 to defend a corner: http://ps.waltheri.net/database/game/169/. This is more common on an ogeima (large knight’s) enclosure from the 4-4, since it’s a bit more solid, and the large knight is a bit of a looser extension.

Playing the 3-5 is a bit less secure, but it takes more territory. It’s more common for any enclosure, and is basically the only thing that’s seen on a keima enclosure. Here’s a game where someone plays it against Ke Jie. Now, Ke Jie is one of the most aggressive attacking players in modern Go, so he immediately invades anyways, but it’s a reasonable move, most of the time: http://ps.waltheri.net/database/game/72265/

Here’s a game where it shows up with the keima enclosure: http://ps.waltheri.net/database/game/74845/. A word of warning: that’s a Mi Yuting game. He’s one of the other most aggressive attacking players in modern Go. He does things that look absolutely awful, and then his opponents collapse when all of his awful barely alive-looking groups connect to form some kraken-esque super group that eats everything on the board. He does Go magic, basically. Being Mi Yuting, he makes a solid enclosure, and then decides to give up his entire corner territory to go attack something else. Had he wanted to, though, he could’ve easily taken all of his corner points, and there would’ve been nothing his opponent could’ve done to stop that.

In general, I’d recommend never playing the 3-3 to secure your corner. It’s, at best, a crutch to defend something you should be able to defend in a better way. You might win some games at your current level, but learning to defend a more proper corner enclosure, and learning how to take advantage of the situations in which your opponent is able to successfully invade you, will make you a better player in the long run.

It looks to me as though at move 196 White could have played at 3-3 (rather than at M11) because I think he is slightly ahead and could have secured his victory. Or am I counting incorrectly?

Oh, I bet you have

how about this one?

Now I agree that it is not THAT common and nowadays not modern, since people usually invade 3-3 with like a third move anyway, but I would be very carefull about saying never in go. It can simply be the least bad aji defense if your opponent did not find the time to invade, and especially in lower ranked games I think it can be a good move. After all we have to play according to our current skill in my opinion.

yeah you could argue about PRO and SOMEONE, judges would have to decide that.

I also think that it makes more sense there than as a general “take the corner” move, since it’s in response to F3. Playing D3 could allow shenanigans after D2, while after C3 white can just continue solidly with C2, after which the cut at C4 ladders to the side because of the keima.

I guess I didn’t really mean “never”, but more of a “never played just to take the corner when the opponent isn’t approaching”. If you need to limit aji for some approaching group, the 3-3 does that quite well. Mi Yuting would still find a way to sacrifice his territory to go attack something else, though

There’s no need to play 3-3 at 196 because black shouldn’t be able to invade. Counting the board is a tougher task than killing that invasion, IMO. (Unless you just use the score estimator!)

I agree, but for the OP (20kyu) it would have almost certainly saved the corner (and game) for him or her. In other words, as noted above by @Vsotvep and @AdamR, in this situation it is simply securing the win.

But I agree with you that in the long run the OP should learn how to defend against such an invasion.

I’m a lowly 9-10 kyu so I’m probably wrong. But I would try S2 as white’s move #200. Presumably black will block from either S3 or R2, and I will start crawling out along the 2nd line from the side left open. If black lets me connect to friends, they die by suffocation. The instant black tries to block me with hane I will crosscut. Black then needs to waste a move strengthening the cutting stone (letting me capture it is instant defeat). This gives ne the tempo to turn to the other side. I think white will easily win the semeai.

May be some other defence is easier to grok?