Review request 25k - What did I do right? 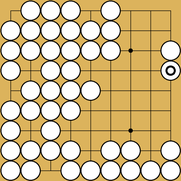 This was a very fast game that just kind of came together really well without a lot of overthinking or analyzing. It seemed to flow really intuitively and just worked in a way a lot of games I spend much more time with don’t. I’m wondering if there is anything to learn from it looking back. Was I just lucky and happened to capitalize on some of black’s missteps or are there some positive strategic examples I can keep in mind in future games?

I’d say you consistently took advantage of your opponent’s mistakes.

Thank you! This was very helpful. At a point you said that the game was pretty much over and I could have just passed and won. One problem I have been having starting out is knowing how to recognize when that point is. I just started playing other humans on here. Most experience is with apps/ai so it will just tell me when the game is won or lost and no more moves are necessary. I don’t know if it’s a healthy thing to do but if a game is close enough I have been playing all the way through to the last possible stone just to see how things pan out. Any recommended reading/videos on end game and recognizing when you can safely say a game is over without playing out all options?

Advice that I can give is to review your game backwards:

And so on. Go through the game backwards one move at a time. Was each move actually necessary? You will see that a lot of them weren’t… At the point where the stones were pointless (pun intended,) it’s time to pass.

Thanks! all very helpful. I definitely see now that by not playing J7 on move 118 I left an opening for black to create two eyes and lock down their entire formation. Luckily they missed that too and played J8. Definitely need to keep an eye out for that. I also see that move 116 was an important move that should have been played way sooner instead of wasting stones in situations that don’t even need them. Thanks for actually responding. I’m glad I found a site with people who are actually willing to take the time to help others learn to play better!

Thank you! This was very helpful. At a point you said that the game was pretty much over and I could have just passed and won. One problem I have been having starting out is knowing how to recognize when that point is.

This is a normal difficulty for beginners and is related to the issue of being able to recognize live and dead groups. You seem to understand the basics of it - you understand why move 118 should have been at J7 - but still have difficulty applying it.

The rules do not define life and death - it’s something the players need to agree on at the end of the game after they have both passed. a group is live if both opponents agree there is no way to capture it, and it is dead if both opponents agree there is no way it can save itself from getting captured. If the players can’t agree, they can resume the game - but it’s not common because they really shouldn’t have passed in that case.

Now in practice, you should be able to recognize live groups - most commonly, a group that made two eyes is alive (it’s not the only way though, there is also seki). Once you are good enough at recognizing life, everything becomes more clear:

Once both players territores are fully enclosed and there is no way for any of the players to make new live groups, extend their existing live groups, or kill any of the opponent groups, it is time to pass to end the game and count to see who won.