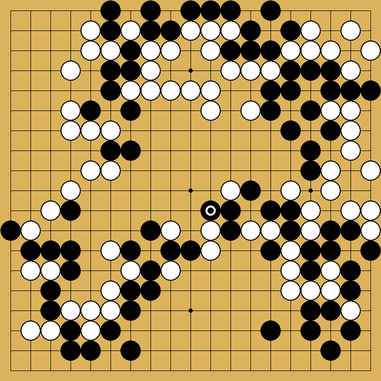 I have a lot of… uncertainties in this game. Honestly I think I had a great start, and made use of it really well.

But after spending 2 moves to kill the top group (104 & 106), giving black the bottom corner, when I counted it suddenly look like black is not behind that much in territory, and still has more potential than me on the right side (Ponnuki in the center is too OP, nerf plz!)

At this point to me the game look even, despite me feeling “winning” up to this point, so I don’t know what I did wrong.

Move 138 feel like a big mistake as well. Because after black 139 it become a decisive battle where I’m on the losing side. When I look back, maybe just pull back 1 step (N9 instead of N8) and I could have won by normal endgame. Is that right?

On the battle itself, it seems my sabaki was terrible, hoping someone could point out how I can live inside black territory (I’m fairly sure it is possible, I just can’t figure out how and died)

hi,
i left some comments iin chat… i doubt they are particularly helpful

. anyway i bumped the thread, maybe someone else will come along. it was an exciting game to watch

move30 seems too early, he can easily respond with something like s13 and black is fine, you’ll find yourself actually fixes for him
so you actually need another move around r11 area before you start going for s14 type move

also, although move 26 can run out because you have ladder in your favor, but is it really good to run it out so early in game?

moves like 32 is insanely aggressive, i probably play somewhere around r11 or
the best attack he can do to your 3 stones is like l17

moves like 58 is insanely aggressive as well as 72, im pretty sure there are better moves than those
move like 88 isn’t really necessay, he’s surrounded on all points, just fix at d6 or c5, once he plays something like c10, you just play at b11 and he still isn’t alive yet, he has to try to make life locally which is hard, he has nowhere to run to, very little room to make shape/eyes/base

moves like 100 is super aggressive as well…might as well just ignore or h8
ignoring 103,105 seems insanity just for a kill
not fixing at 118 seems so unlike you, going for the fight seems much better imho, but once again, maybe we prep a move(r11/r9 type move) beforehand to get the fight going in your favor

anyways such an aggressive style only needs to work on reading, just tsumego for life and you’ll be fine
check it out with an ai, im sure he’ll find better fighting moves for you

when you play such an aggressive style, always remember to play good shapes, otherwise you’ll have weakness for opponent to attack instead
also try to gain some moves in sente before attacking/fighting so that fights will go in your favor instead of just going random crazy fights without preparations and let god decides the outcome
all those insanely aggressive moves should be finishing moves, perhaps you could attack from a distance first(ask for backup stones), probes for opponents mistakes then lay down the finishing hammer
not just go all-in every single hand, you’ll lose some and win some but if you did the preparations beforehand
you’ll find your battles are much easier fought and won ganging up on opponent, instead of fighting 4-5 guys heads on just cause you know kongfu…

Hey thanks guys for commenting!
It’s a bit hard to talk without a review though so I created one for @kickaha 's here https://online-go.com/review/430788
Will continue on