Here’s a game of mine as white against another 3k: 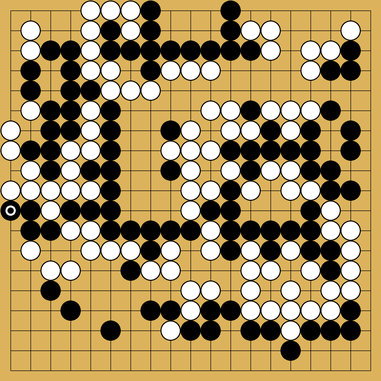 Early on in this game, we got involved in some fighting on the right side. I was looking at the board and thinking: "I’ve got my opponent divided in two, with a weak group in the center. I should be able to attack for profit, so I’m probably fine, and can get a good result if I do this right.

Leela disagrees. I ran some analysis on my game after I finished, and it wasn’t close. I was behind by move 44, and everything went further downhill from there. What’s wrong with my way of thinking about this position, and how should I be evaluating it, both in terms of how well I am doing and what I should do next? I’m obviously doing something very wrong right now…

I should be able to attack for profit

So where did you expect to make profit? Clearly not on the bottom side. As for the upper side, losing Q12 was a big setback.

Also, keep in mind that the right hand side was yours to start with. Black ended up taking a lot of points there. S7 and R9 look very submissive. What does Leela tell you at moves 30-32?

It looks to me that you’re not fighting for profit but to reduce your opponent’s profit, rather, and as a result you were the one with weak groups to take care of all over the board and no territory. By move 70 black has no weak groups while you have 3 of your own to take care of.

That joseki in the lower right corner was never gonna give you many points to begin with, so better use it as a strong group to attack or build influence.

I wrote a few comments in a review, would love to hear some feedback as well 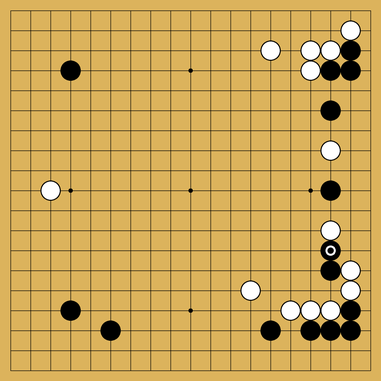 Thanks for the feedback, everyone!

I’m not really sure where I expected to profit, to be honest. I think I figured that either the side would be weak, or the center would be weak, and I’d somehow get strong groups to give me influence to profit…somewhere? Maybe on the top? I definitely didn’t attend enough to my own weak groups, so my influence didn’t really work. Not thinking about where I’m going to profit, potentially, is definitely a weakness in my strategy I need to work on, though. In this game, I think I was trying to hard out of the opening to limit my opponent’s potential on the right, rather than building anything, which is something I think I do too often, both as white and as black.

I think I’m also overly reliant on playing moves because I remember them from Joseki sequences, rather than because they’re the right moves in a given situation. The whole debacle on the right basically started because I gave away sente twice on that side. In the first situation, I knew that S18 was playable, but while it gets the most territory in the corner, it gives up sente to do so. Q17 or R15 both gain sente, which is far more valuable in that position. Then following the ill-advised pincer on the right (leela says just back off and make a base in the corner), I definitely shouldn’t play N5. It’s “joseki”, but it gives black sente to attack the weaknesses on the right. Defending there is more important than the bottom.

For moves 30-32, Leela thinks black actually overplayed with R10, and that white has found a decent response. 30 and 32 are both the top engine suggestion. However, the cut at Q10 on move 34 is the final major mistake. White gains weaknesses that will never be fixed. S10 is necessary, and white can connect underneath to R12. Black gets major central influence, but white is solid and alive. After Q10, there’s never another opportunity for white to gain the advantage, or even equality.

Here’s a short review (first 34 moves or so) based on Leela’s suggestions: https://online-go.com/review/343897

I think you still could have played much better after the move 34. I suppose you didn’t know how to manage your and your opponent weaknesses well. 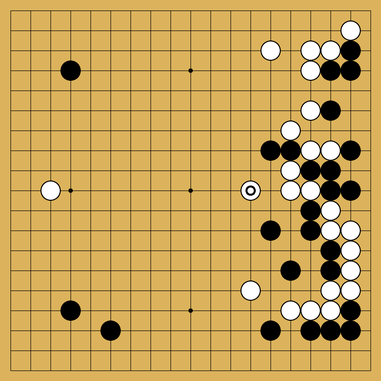