I lost this game by 2,5 points, but had the feeling of playing a lost game the most time. I would love, if somebody could review the game. Also don’t pay attention too the 1d rating. I’m 5k in real live and got the the 1d rating with teh big change of the ogs rating system. Was 4k before that.

What were my main mistakes? I think I emphasized territory too much at the beginning of the game and let me pressed too much on the third line. Also living at the right side was maybe too small. 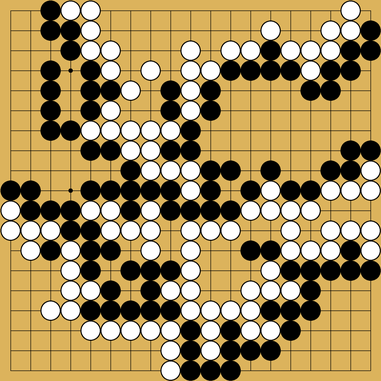 Thank you in advance

Speaking as a ~4-5k myself, I don’t like the sequence played on the upper side of the board: on the upper left you played for influence but then you switched to the upper right and played territorially. I think that P16 would’ve been better than Q17. Later on black manages to put pressure with C7 at the same time as starts to develop the left side, my response here would be a capping move which also attempts to develop my white’s moyo, instead of K5.

I’m not sure about the invasion, I think that after exchanging C8 and C9 I would tenuki and jump shoulder hit at P11 AlphaGo style just to prevent black from building up a moyo

But seeing that your invasion worked out maybe L15 is enough to both protect your area while reducing a bit.