Just finished a game against someone ranked at 5k, but with most of their losses due to timeout, and a history from about 4 years ago of being a dan-strength player. Their name was “trytrykiller”, so I mostly focused on trying to keep everything solid and alive, so as to not have to worry about them trytrying to kill me, and likely succeeding.

I think I was mostly successful. I had some small but solid, regions of territory, they had more or less the same. We got to endgame, and they ended up timing out due to lag, unfortunately, so we didn’t get to finish. Leela (of the non-zero variety) thinks I was ahead fairly solidly at the end, though not by an unassailable margin.

Outside of the actual moves, though, the game was kind of weird. They were fairly insistent that they had won by a lot, and someone else played hundreds of moves against themself in a review for the game that didn’t really have anything to do with what we did.

How did this game actually go? Did my “play solidly” plan work out reasonably well? What could I have done to improve? 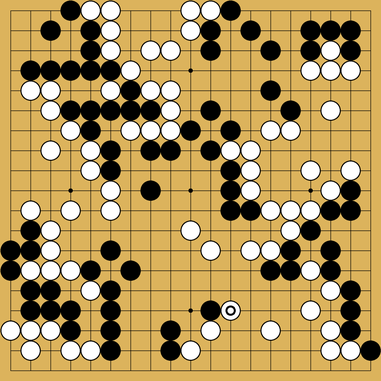 As a player around 5k, I can’t see any problems with your moves. Some of his moves are odd to me as well, though – thinking of those second line pushes at R18 and S3. Might not be the same player now as four years ago, of course – the account could have been passed on.

My thoughts on the game:

I do not believe your opponent is of dan level. His moves do not reflect it. He also seem to have a record of being bad mannered in chat towards his opponent, and a moderator should decide on a best course of action for that.

Overall it was a well-played game on your part. Aside from finding more tenuki opportunities in the early part of the game and stone efficiency ideas, the direction of play is on the right track. You were leading by around at least 10 points in the end by the most conservative estimates. Remember: being solid can also mean being too slow – grasping the balance is key.

Awesome, thanks for the review! Lately, I’ve been feeling like my tendency is to overextend my shape and then lose the fights that follow. That was what was guiding, for example, my decisions to respond to the second line extensions. One one hand, I know it’s theoretically my move, but I worry that if I tenuki, my opponent will approach the other side, I won’t have room for two eyes anymore, and I’ll end up running my group across half the board while my opponent builds up and/or kills me. Definitely need more work on finding the balance between “solid” and “slow”.

I always advise people to move beyond fear. To fear the unknown in go means you haven’t read the consequences and follow ups of your opponent’s next move. Defending in fear of something and losing locally is not as beneficial to your improvement if you thought you read a position thoroughly, took a calculated risk and still lost locally.

When you are feeling uncertain, let go of that impulsive need to defend blindly and read!