I was on a bit of a winning streak, until this game

I misread a fight in the end game, but I think I was losing by a slight margin before that. I probably would’ve played it a bit safer if I wasn’t, but was in the “every point matters” mindset at that point and figured I should try to squeeze out a bit more endgame.

I think I had a few big mistakes before that:

Here’s the game, plus a self-review: 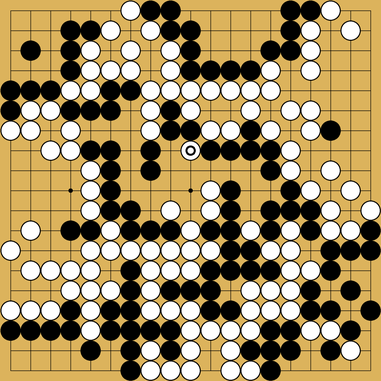 Are my assessments as to what I did wrong reasonable? Where else could I improve?

I’m just starting to review games so hopefully my comments are helpful to you and others, and if so please let me know as I’m not that strong to give solid advise just yet

I’ll agree with the unfinished sequence at the beginning, it leaves an unsettled group that could get attacked easily by either a pincer or the cut at N17, but here your opponent actually made you stronger with the push on top. I think that you should’ve used this and continue to escape, saving the one stone R13, because this leaves white with 2 separate groups a lot of aji behind.

Not really familiar with 5-4 variations but those are usually for influence and the intention is to wait for the opponent to invade the corner as you did, which is not a bad thing just something to keep in mind.

At the bottom left approach you responded as if white had approached low and you kick the stone forcing white to extend. If defend solidly your corner is safe while white still has invasion points open even with one more stone. I would go for building the bottom of the board rather than invading directly.

Move 11 was probably ok because White did not punish the lack of joseki move. Your other judgments seem reasonable. Probably you could improve a lot if you played lighter. A lot of your trouble came from saving stones with no apparent purpose.

Thanks for the reviews! I definitely get tunnel vision when it comes to fights, sometimes, and end up playing slow, heavy moves when I should be addressing major points of territory. Something to work on, in addition to my moderately abysmal reading skills.

I got some redemption against the same player today. I messed up ALL of the tsumego, but focused enough on playing big points and trying to make territory that I ended up coming out on top: https://online-go.com/game/12073617

Comments on your comments: https://online-go.com/review/304557