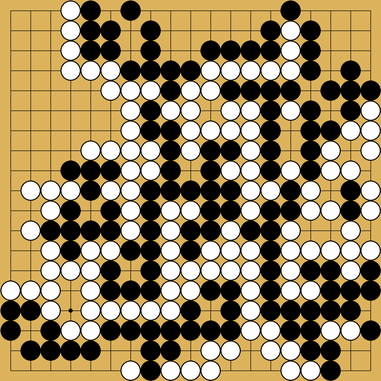 In this game i was black (don’t pay attention to the ranking, i’m not actually 2dan)

My main thought is that you were generally too defensive and passive. In a handicap game, Black has to use his initial advantage to attack. Try to separate White into small pieces, don’t let him build strength and build strength yourself while attacking. White should be the defending player, not Black. For instance:

Thank you for your insights, Yes i figured after the game that i let white grow too big especially on the left side. On the lower left corner i misread the cutting points with the B2 move, maybe playing C2 was better but gote. Also i think the joseki option on the upper left corner was not good for black, but i have trouble deciphering what was better… maybe playing D17 instead of E17 or even G16… or maybe approaching from the other side of the corner but it was riskier.

B2 looks fine, but you crawled too many times afterwards. You could have tenukied after e.g. White F4, Black is safe enough at this point.

E17 looked fine, it’s a common joseki. D17 and E18 are other options which are almost equivalent.

The handicap system’s goal is to give both players - of an unequal strength - the same chance of winning a game. If you play passive - by playing defensive moves - you hand over the initiative to your opponent, who will be happy to take the big points and secure easily much more territory than you do.
If the midfield seki wouldn’t have happened, you could have lost by at least a 100 points. For a 3 stone handicap against a 7kyu and a 4 kyu, that is enormous.
So don’t let the game be dictated but try to pressure your opponent into unhealthy shapes, etc. Fight more and run away less.