I was a bit surprised I was behind as far as I was in the end… Was my opening off? Or was it closer to midgame…

Please don’t hesitate to highlight a mistake beyond my level. 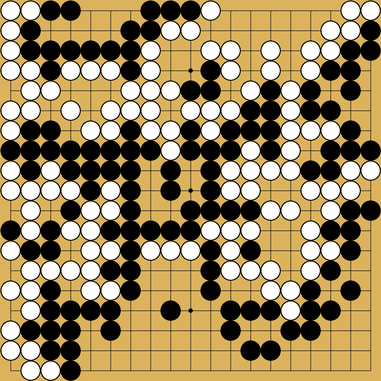 Not done a full review, but I’d first look at your endgame rather than opening or mid-game.

The most glaring error of course is letting the 3 stones at K7 be cut off. There were many ways to connect them and maybe even push further into black’s territory. That’s probably 10-15 points difference by itself (at a guess, I haven’t actually read out the variations). Black’s O13 was also a really big move that could easily have been prevented by (amongst other things) playing L13 to capture M13 a few moves earlier. Those are both far bigger than the multiple moves on the first line in the bottom left corner or H14 or P11.

As I said, I’ve not done a thorough analysis, but I thought I saw other slack moves in your endgame too. I can’t tell you for certain, but my guess is that around move 150 you were actually either ahead or very close then lost a lot in the endgame.

That’s why I wasn’t surprised I lost, but there were 10 points too many for that to be the sole reason

Black’s O13 was also a really big move that could easily have been prevented by (amongst other things) playing L13 to capture M13 a few moves earlier.

I see… I had not considered that. L13 seemed small at the time, but I guess I need to think a bit more about how those pokes could effect my game.

my guess is that around move 150 you were actually either ahead or very close then lost a lot in the endgame.

I felt that way, so that’s why I was surprised by the 20 point loss (a 10 point one I could have understood)

Okay, so I need to watch out for slack moves, and study a bit more endgame. Thank you!

I finished reviewing it: https://online-go.com/review/301408

The biggest issue I spotted is your choice of moves are often relentlessly conservative, even submissive. In several places you had the upper hand and could have cut off large chunks of territory for yourself but did not. It may be something to watch for.

Thank you for the review!

It’s kinda odd being told I’m too conservative when many of my games end because I overplay, but now I see the many opportunities I had to get ahead that I didn’t take.