would appriciate somebody reviewing my game:

→ Overall fuseki and joseki (Especially lower left corner i think i messed up)
→ Generell reading ability (I think i lost the game in the middlegame fight, my aim was to sacrifice the middle for the overall benefit on the left middle site…I think there would have been a more basic way of securing the middle black stones??! 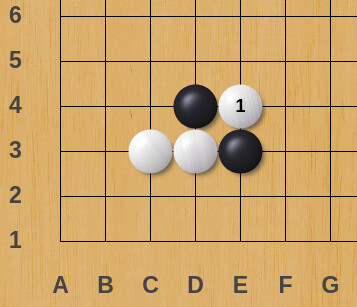 Black would be broken if white cut. You could try to read why this is so as an exercise.

For the correct joseki you may refer to this:
https://online-go.com/joseki/10926
which is simple and playable for both.

An old joseki that AI doesn’t like as black. Actually some pros began to doubt this is any good for black before AI appeared
https://online-go.com/joseki/166

You ask very good questions, and that tells me that you are thinking about the game in the correct way. That makes it easy for teachers to guide you in the right direction.

The game was decided by the middle game fight, and I think your overall plan was incorrect. Trying to sacrifice the middle to help the left middle side means you will almost certainly lose on points.

You played extremely well in the fighting sequence on the right leading up to move 65. Move 65 was likely the reason you lost.

Comments on the game

K5 (move 17) is a good move, but the timing is a bit off since your 4 stones on the left are too weak. I recommend a simple move like H4 here.

C8 (move 29) is an interesting move, and shows that you have good intuition. I think you are trying to stop white from developing the middle/left side, but your stone is a bit too close to white’s extremely strong wall. I recommend a move like D10 (much harder to attack since it’s far away) or a move like D16 (very far from the white wall).

Later on, you can extend the stone at D6 to D7 or C6 to attack white’s corner or the two stones at E6 and F6.

R10 (move 41) is an excellent move, your best move of the game. I think most players would go at O4, but your move not only develops your side, but also attacks white’s group.

S6 (move 65) likely cost you the game. Generally you don’t want to force your opponent to make a tiger’s mouth because it’s really easy to live with a tiger’s mouth shape. A simple move at S5 here would have been significantly better.

The rest of the game is hard to review unless I know your thought process behind each of your moves. Doing life and death puzzles would help you tremendously because it looks like you enjoy fighting instead of being more passive.

I offer Go lessons which you might find helpful for improving. I have over 10 years of teaching experience at a local Go club and have taught 100s of students of various ranks.
If you are interested in Go lessons (first one is free), please email me at nharwit@gmail.com