could anybody review my game pls: 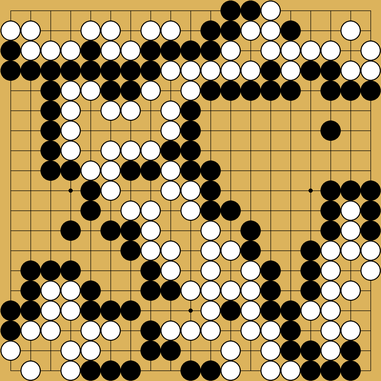 Normally i post only games, where i lost, but i think it could be useful for improving my game, to know why i won this particular game. What did i right, that i won this game??!

→ Generell opening (Did black played the bottom right joseki?! right??!)
→ Midgame strategy ( I tried to attack whites thick group on bottom middle, by a cap move at move 39. After that i tried to build a moyo on right site ( I think i did this OK)
→ Endgame moves and fighting

Thanks guys have fun! :>

I am similar level (6k) so I cant say too much but here goes :

Overall though, good game. As shown by the decisive win!

R 15 looks bad, i ll play S 15 locally instead. Big difference in terms of life for both groups, but then S 18 is crucial for both and not taken.
One saying is urgent before big. A move which take away and make base is urgent. Besides It’s big too.
If AI didn’t like M6 peep i think It’s because of direction, peep from other side being better.

Summary: Your opening is decent and you have a good feel for decent moves. Your cap at move 39 was the best move you played all game. I don’t recommend spending time on endgame at your current rank. Overall, the two key things to improve on are: shape and not playing forcing moves that destroy your aji (aji keshi)

General Opening: You played decent and have a good feel for decent/good moves.
The first notable mistake is R8 (move 11), it simply leaves you with too many cutting points. Q7 is a much better move because it simplifies your decisions and leaves you with no weaknesses.

Midgame strategy: You started playing towards the center in midgame, which is generally not a great strategy. I’m referring specifically to your move at O15 (move 41). D14, N9, or N8 (which you played later) are much better moves.

Your shape could be a bit better. An example is: R15 (move 33), which should be at S15. This weakness in shape affects your midgame fighting potential. The stronger your shape, the easier it is for you to fight.

Move 39, the cap, is an excellent move, and it is the best move you played all game. Many players play too defensively and are afraid to fight. The timing on the move could be better, since you are still leaving your top left corner open when you play this move. I recommend D14 for move 39 instead.

When you played E4 at move 45, this tells me that you have a bad habit of using forcing moves (likely without thinking) too often. The move at E4 is called aji keshi, meaning you destroy your aji, or potential for good moves there in the future. Other examples are O16 (move 63), M4 (move 23), and M6 (move 25).

I don’t think it’s worth focusing on endgame at your rank. The opening and midgame are where almost all of your games (90%+) are decided, so that’s where I recommend you spend most of your effort.

I also offer Go lessons, which you might find helpful for improving. I have over 10 years of teaching experience at a local Go club and have taught 100s of students of various ranks.
If you are interested in Go lessons (first one is free), please email me at nharwit@gmail.com