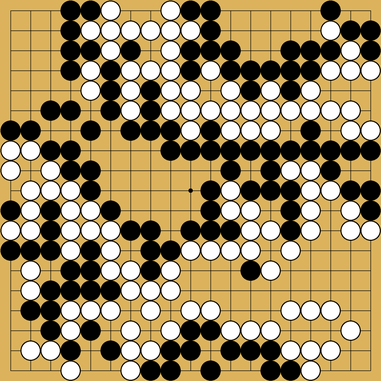 Hello! I played this game and I would like some comments on it please.

Here are some thoughts of mine:

Move 31: A diagonal hit at Q9 or a pincer at Q7 are my first thoughts but the game move worked well enough.

Move 51: As you say, double hane does not work. It seems too obvious to mention but you should avoid playing moves that do not work. Stretching out would have been stronger. You can always hit 3-3 later as in the game.

Move 55: You did not identify this as a mistake but it is a big one. A ponnuki is too valuable to allow. I would much rather sacrifice 3 stones and connect to prevent the ponnuki and gain entrance into the lower side area.

Move 59: Why not push through the knight? I do not understand your choice here.

Move 83: Bad pushing from behind. You should have played one of the two knight’s moves instead.

Move 103: I prefer a net or a one-space jump from your lower group.