can just somebody review this game here pls. 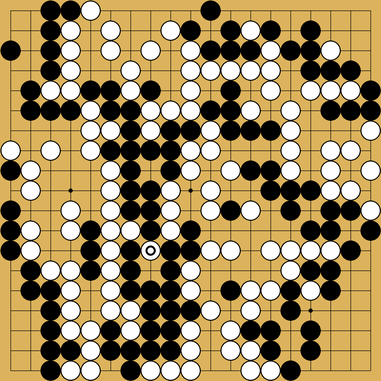 I think I played pretty decent against a strong 4kyu. In the end my dragon got killed, but I think I just failed to make it alive some few moves earlier.

→ General opening
→ Midgaame strategy. I think invading his top right was dangerous, since then I had to run with the two groups on top to the middle
(I just thought if I do not invade top right, he might get too much on top, since his left top wall got pretty solid??!!
->Things I need to work on =)

Not a review but a quick comment. In this position you are cutting two groups. Cutting is useful when at least one of the two groups is weak, but this is not really the case here.

Similarly, in the following position you are saving two stones which are not very important since they are not cutting a weak group from another. Surely there are bigger points elsewhere. For instance White wants to play at K12 to separate your two weak groups, so you may want to play around there.

M17 was a mistake. k14 or even q18 would have been much better. There not that much territory down there anyways. Think about it, if you make Q18 instead, the points you gain on the corner are going to be more than what you take away on his side and you don’t create another weak group. Also, the two corner stones aren’t that secure once his outside becomes strong.

And as said G15 doesn’t warrant a response, the two stones are not that important or big. You might want to think about the k13 move in this instance to try to connect the two groups.

I can do a full video review on my YT if you’d like. I’m always looking for more content to review.

Thanks for reviewing Sir

Let me know if you want a video review. I’m always looking for more content and reviewing Kyu games is a good way to grow a channel.

Appreciate that Sir, but I don’t know if my oppenent agress to it^^