i played a game here recently: 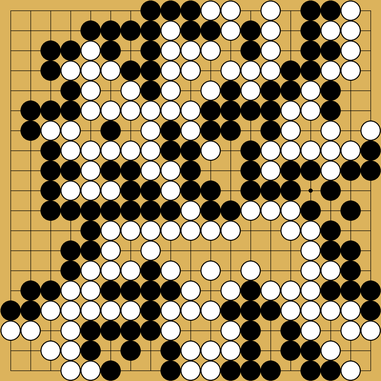 So i think i played a decent game until move 60 i would say (Sure i messed up some joseki sequences in bottom right and left, but i do not want to make it a highlight in this particular game)

With regard to the game, i try to find out the different go terms between “thickness” and “influence” in general. Having said that, i know (from couple of strong players posting comments on a couple of forums, that is quite hard to differentiate this two concepts properly.

As far as i know from reading and studying, influence might have problems with shape, where thickness might be more of a strong wall.

Maybe somebody could elaborate on my stones in the right top corner (i would call them influence, because there are shape problems, like the whites move on 64). How could i had played differently. I tried basically to get my territory on the top left corner and middle left site.

Thanks for comments and sorry for the long text

In addition to my posting, i tried to make use what AI suggests, but would appriciate a human opinion more =) (I dont know i cannot get very much away from the suggestion ai made how to use that "wall with shape problems^^^"

There is a big difference between a wall with an extension or without . Even sometimes walls have some ways to generate eyes if they need.

Building walls help to get control on some optimized area (in term of distance between).

Now if your opponent can negate that optimal setting by occupy the extension place then it’s a loss. Your attempt to extend will be overconcentrated or too far and disconnected .

Walls can even die…

In your game you need to check well the defects in your boundaries,still have a bit of improvement to do on that side.

sometimes walls have some ways to generate eyes if they need.

With the early 3-3 invasions and heavy fighting, I find that a significant portion of the hypermodern metagame is discussion over the health of wall groups and what forcing moves they have at their aid.