First game in a couple of weeks, I was just happy it wasn’t a complete humiliation

I understand this much from the AI: I guess I could have split black at the top instead of saving one stone, and I missed the vital point on the left side…

But in general I just have a really hard time evaluating the board state around move 50-60 when the AI says that the game turned in my opponent’s favor. I’m not really able to see any big weaknesses or areas to develop

No need to worry about evaluating the board too much. This is hardest topic. The AI suggests 90% winrate of you, but the stone difference is only around 10.

Three local areas white was winning that is important concept: 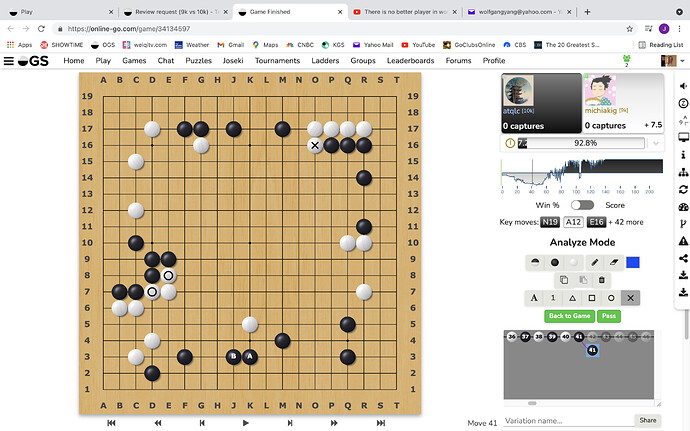 Black shouldn’t really have played the (11) R16 variation of the pincer without support on the right side.

Your (14) P17 is an usual shape. There are three main moves for White here: the simple and traditional O18, the undercut S17, and the confrontational O16. However, P17 is very similar in meaning to O18, in my opinion; I believe the difference lies mainly in endgame concerns.

Black’s (15) J17 was a pretty big mistake. It was imperative that he maintain the seal of the corner, with either N15 or O16. Of the two, O16 is probably better as the looser N15 doesn’t account so well for the fact that you removed one of Black’s liberties with P17. 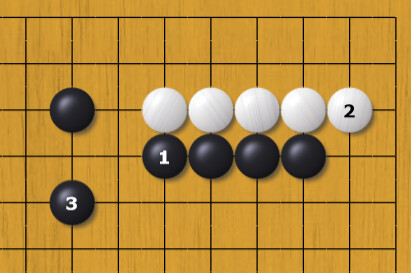 but ofc there are other ways for both colours to play.

Black made another mistake by extending far too tightly on (17). He can extend three spaces (or more), understanding that White shouldn’t be interested in playing A before the endgame: 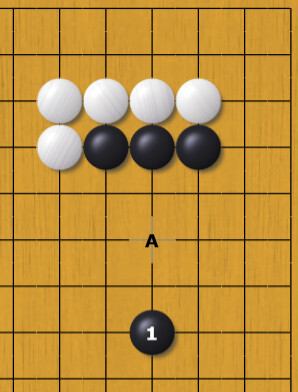 Of the two comparative enclosures available on (18), C6 and F3, F3 feels a little more natural but they are probably similar in value. Kata is indifferent. I’m not a fan of how Black developed – I’d be more interested in this sort of structure, in which the stone under the hoshi becomes quite well-placed if White makes the A–B kick exchange (which would feel odd to me).

For him to play at D2 (as in the game) or E2 seems too low. Observe how after the corner exchange, the marked defect becomes more severe as Black has invested another stone in the cuttable portion of the group:

Your cap (22) was a very simple idea. However, I’m unhappy with this exchange as it makes the corner play into an asset of Black’s shape, you having induced him to fix the weakness. This looks like an overly generous way for White to play.

Instead, I recommend invading immediately at X in the previous diagram. In the game, ofc, Black played the less relevant eastern keima. Your right-side play (24) was a bit passive, not really challenging your opponent. Instead, consider approaching the corner: 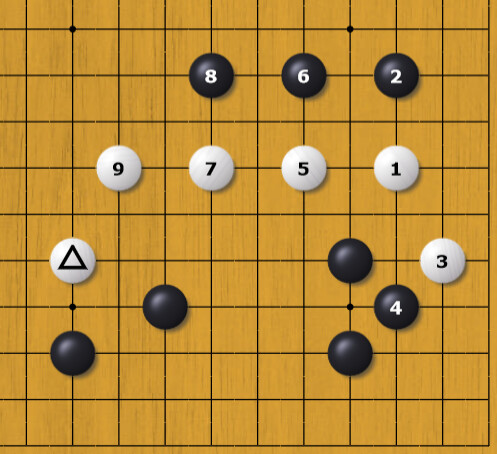 See how you can run out to the friendly stone.

There’s no need to rush away from the right side on (40). Try playing more steadily: 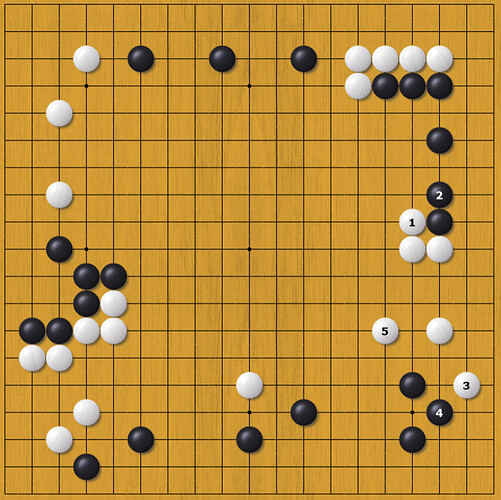 On (48), Black presented you with miai of A and B. In the game, you took A and Black took B; I think White would prefer it to be the other way around. Losing sente is a bit painful since S5 is big for both colours.

On (54) you missed a good chance to press your attack. This was a question of technique.

The score difference was within about 10 points for the whole game. So at your level, I would qualify this as a close, solid game without big blunders. So you both did well!

Looking a bit more closely and finding moves where the score evaluation shows some bigger shift:

Move 54 & 56. This is a matter of efficiency/speed. White first misses the opportunity to take S12 in sente on move 54. And when black takes S12, it’s slow for white to connect at S10 at this stage of the game, because black then settled his group in sente. Still, this is only a minor issue. White’s soft-ish play here only loses about 3.5 points and at 10k level, it’s common for players to undervalue sente.

Then from about move 60 until about move 150, the evaluation graph is a bit jagged with a spike “amplitude” of about 6 points. Checking a few of those, I would characterise this as the AI seeing opportunities for white to gain efficiency by attacking black’s groups a bit more severely (P12, B9). But white doesn’t take those opportunities in the game.

So all of that boils down to more or less the same issue:
White played a decent game, but white’s play was a bit lacking in severity. It doesn’t mean that white should try to kill everything, but white might consider more often how to improve their position in sente and white might also consider more often to ignore their opponent’s move and take sente, instead of just responding automatically.