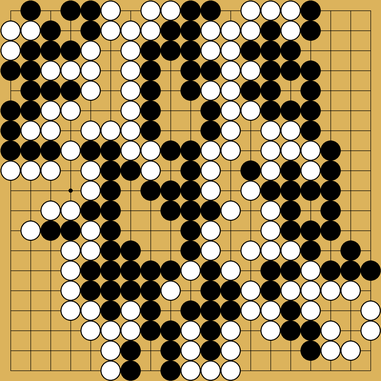 I know won games are a no-no for reviews, but it’s a game with someone close to my rank for a change, so. Color was random, so I got W.

I know AI insists in 3-3 upper right in the beginning, but I couldn’t go in there, I don’t know how, I’m too scared to be cut off and die.
The group at H8 was the same mistake I keep doing, so I need to use my eyes I guess.

Question (I can follow AI to the rest of it, but it gives nothing for the right, it’s focused elsewhere):

The first remark is that in general, you shouldn’t expect to make a lot of territory in the center. Generally you make large territories in the corners or on the sides.

The second one is that your territory shrank because you left too many cutting points. Consider the following position: 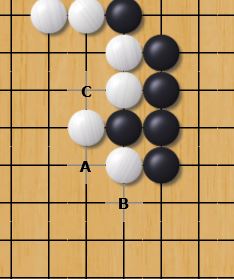 If Black ataries at A and Whites responds at B, then Black has a double atari at C.

So you need at some point to repair your shape, for instance by playing at A or at B.

How could I have done better on the right? That thing kept shrinking.

I’m sorry, but I’don’t understand this question. Around which move number is this about?

That’s part of the question, tbh…

AI insists elsewhere, so I don’t know when it started going south. AI calls for the best move overall, but if it’s a move I would absolutely not go for, it doesn’t help much.

Cuts that @jlt mentioned is a huge part of the problem early enough, though. I did the whole thing poorly…

Oh, this is a very good game to look at. Much better than the previous ones. Swings back and forth, post more games like this. 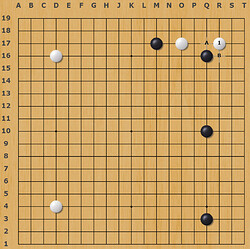 Here it’s indeed normal to go into 3-3, in line with the idea that corner better than center. But if we choose to jump out into the center, then what we’re doing is splitting black into two parts on the left and the right. If black reinforces one side, you should harass the other side, and if black reinforces the other, you lean, attack the other. 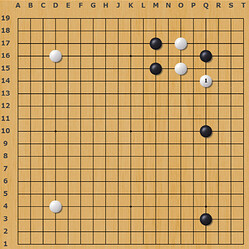 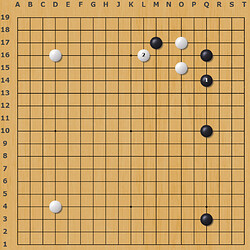 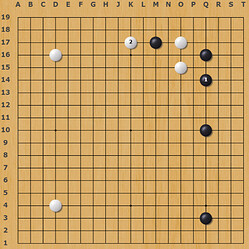 In the game it looked a little as if black managed to reinforce both sides while white where going into the center not receiving any points. 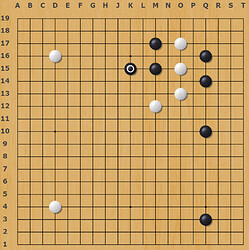 I like this one from black, giving up two stones to enclose the side is clever: 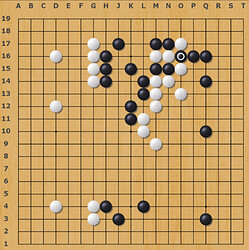 After it, at this point white can look at their center group: 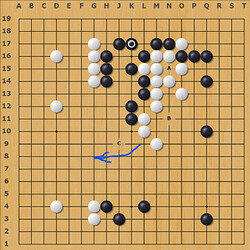 White has an eye A for sure, it looks a lot like the second eye around B. But even if it’s not, white can run C towards friendly stones. So we can conclude white doesn’t need to be reinforced anymore, and we can tenuki, for example to bottom-right.

Next white built a partition here: 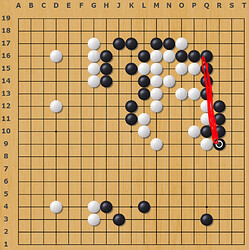 It’s not a very good deal for white. Because black encloses a lot of points on the side, and in the corner, when white encloses just a little in the center. Black fixed the weaknesses for free. Or in other words, white helped black to fix the weaknesses.

Because without these moves, black stones are high 3 spaces apart and white can think of meddling there, in various ways, like A, B, C, and maybe black won’t have anything there. 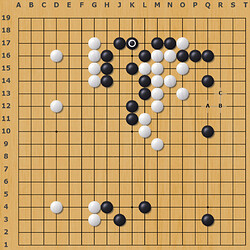 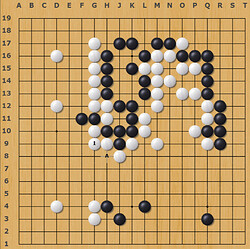 Because it doesn’t give black to atari at A. Fixing solidly in general is nice because you leave less weaknesses and free ataries/peeps for opponent.

Yeah, you didn’t notice that you can be separated. 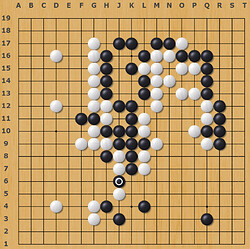 Here you typically want to extend because if you take, opponents gets free atari. 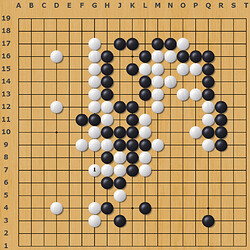 Hit you right on the nose: 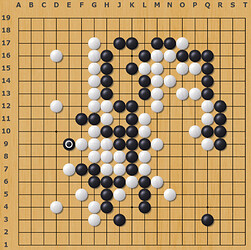 You did nice to enclose the side though. Just be careful with those cutting points: 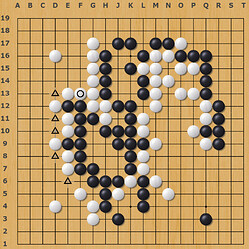 Sometimes it’s correct to let the opponent have a little more but with better shape on your side. This is why AI looks even at fixing directly like this: 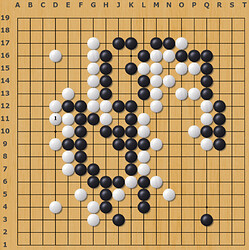 In the corner you’re strong, so the tsumego principle to use here is reducing eye shape (from outside). You cramp opponent so much they don’t have enough intersections to make two eyes. 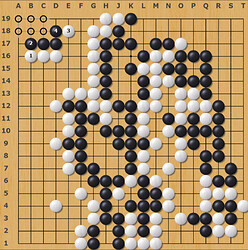 You play 1 and 3 pressing them into the corner and black would block otherwise white just crawls in their wannabe living space. And boom, six in the corner is not living shape. That’s the idea. Throwing stones into the inside hoping it’ll turn into a dead shape is a wrong approach, I think. Unless it works.

After this white is routed and in panic.

Here black has two eyes already and white is alive too, of course. So they should take care of the border there instead of playing moves that get couple of points. 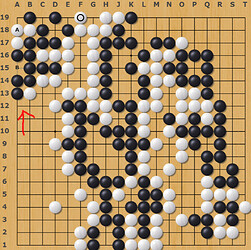 I’m surprised white didn’t try to do the same to black. Look at that space in top right. 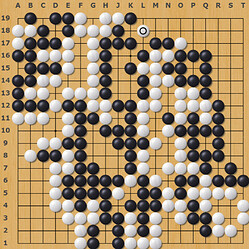 when playing equal opponents, you suddenly don’t die as much

This! A thousand times this! I am of the opinion that Go players can learn a LOT more by playing opponents of similar strength, rather than repeatedly losing to more experienced opponents.

Cuts that @jlt mentioned is a huge part of the problem early enough, though. I did the whole thing poorly… 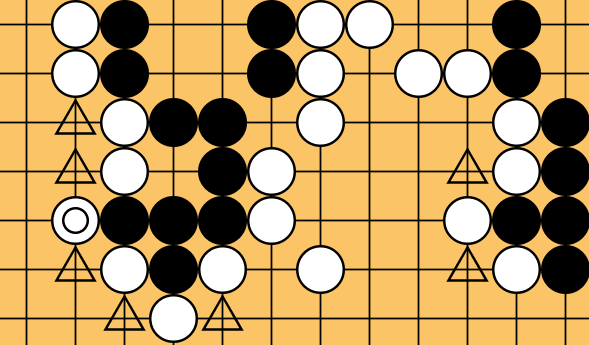 I marked 7(!) cutting points in white’s shape. The question is not really how to fix this situation. The question is how to not get into this situation in the first place.
White created this situation by plastering stones around black’s solidly connected stones. I assume white did that with the intention of blocking everywhere. But such diagonal “walls” are fake walls, because they have numerous defects. Real walls in go are straight.

As a result black cuts everything and kills many stones. White desparately tries to prevent black from penetrating anywhere and white does succeed to a degree, but after move 114, white still has many cutting points: 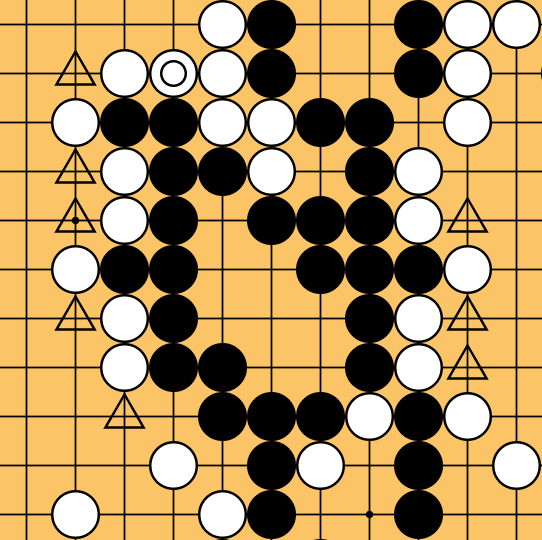 Let’s go back to the position after move 65: 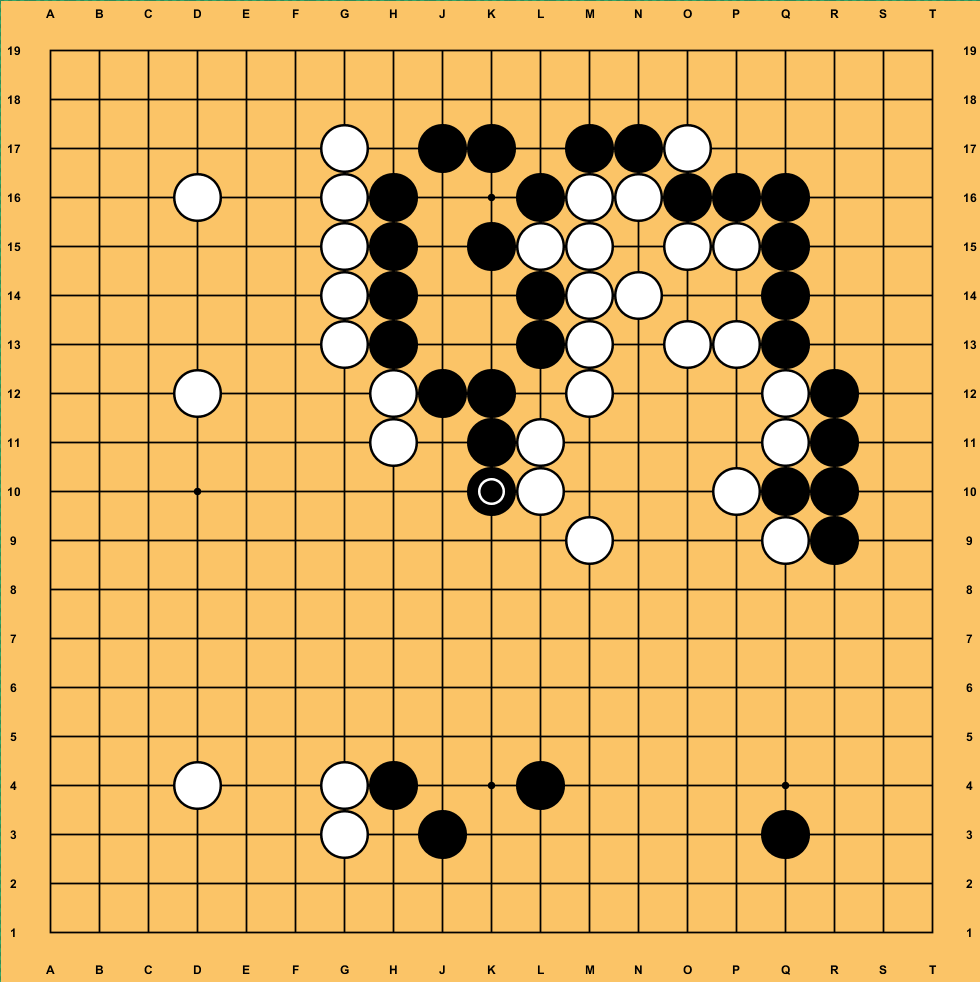 image980×982 23 KB
Why does white try so hard to link up the right center to the left side? How is that worth points?
Why would white even respond to black’s last move? What was white afraid of?

The AI suggests a move on the left side instead. In particular, it likes C9, but really any move on the 3rd or 4th line somewhere between D6 and D10 would have been fine IMO. Also, a move around R5 looks quite big.

As for the situation on the right side, let’s go back to the position after move 51: 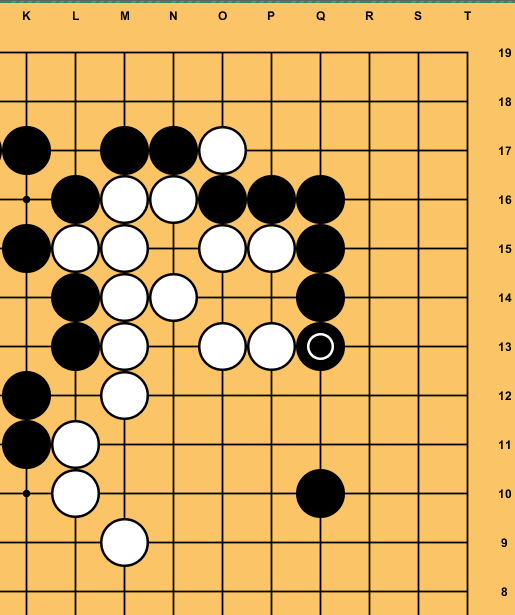 image515×615 7.73 KB
I see no clear need to push into black’s position and create weak white stones.
The result in the game is this (and black could have countered much harder): 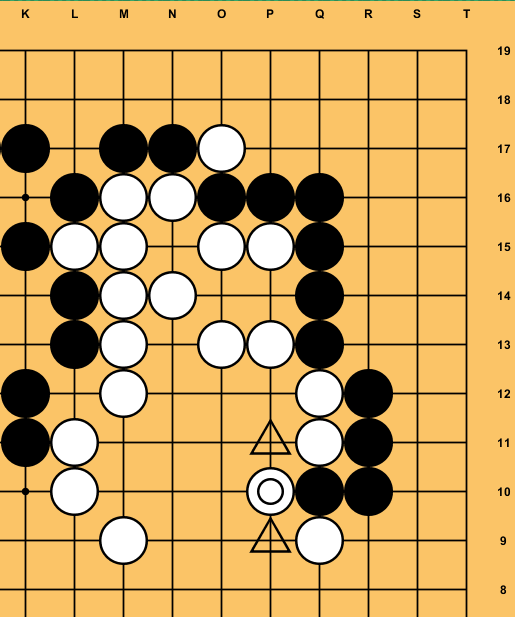 image515×617 8.95 KB
White gave black 2 cutting points to exploit, worsening white’s position. And white lost sente (although black responded in the game).
Also in this case, white created a fake wall (because of those cutting points). But the black stone at Q10 was already there before white started, so there was no way for white to create a real wall here to start with. Realising that beforehand, white shouldn’t even try and play elsewhere instead (a move on the 3rd or 4th line on the left side or approach black’s lower right corner).
1 Like
Gia June 11, 2021, 9:08pm #8

I mean, I turned ranks back on to avoid further issues in the future with challenges, but tourneys are tourneys, what can I do

So they should take care of the border there instead of playing moves that get couple of points.

You mean play A12? I tried a few variations, I end up with B atari’ng me and in deeper trouble. Could you post a follow-up on that? AI tenuki’s, so no help there… I don’t even remember how I stopped the thing in-game, I was paniclicking.

Full disclosure: I was certain I was losing big at that point (also I should learn to count because I end up in these situations), and we were about to finish the game, but that move kept nagging me, so I just asked to try it out.

And I didn’t go into the upper right because I thought I would die for sure.

Which of course proves that playing much stronger opponents has cemented my bad habit “Oh, I’m dead everywhere and obviously losing” and it’s not doing me any favors. I know…

What was white afraid of?

I end up with surrounded dead groups a lot lately.

Now that you show it to me, I see it, but at that moment I just try to save whatever.

White was already alive in the center right. There are (at the very least) 2 eyes at N15 and N13.

Others have mentioned, white center has lots of black around, thus does not have much potential. As soon as it is live, don’t play there any more until much later, unless it is a move to invade/reduce black territory

Here black has two eyes already and white is alive too, of course. So they should take care of the border there instead of playing moves that get couple of points. 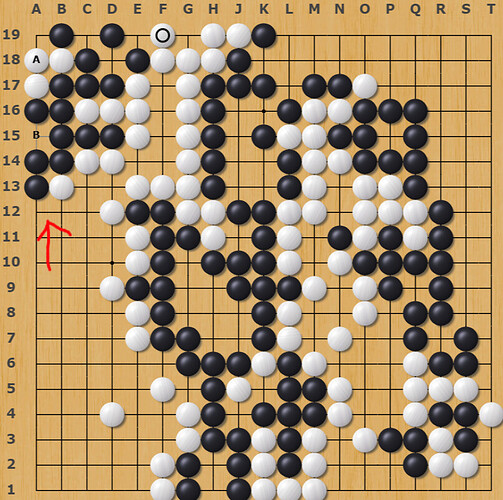 You mean play A12? I tried a few variations, I end up with B atari’ng me and in deeper trouble. Could you post a follow-up on that? AI tenuki’s, so no help there… I don’t even remember how I stopped the thing in-game, I was paniclicking.

White was lucky that black responded to F19, allowing white to play the correct move on the rebound 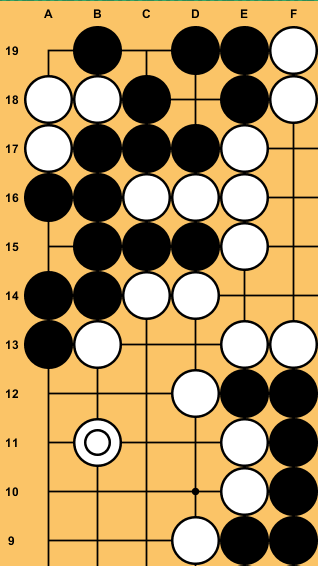 But black could have ignored F19, taking away many points from white: 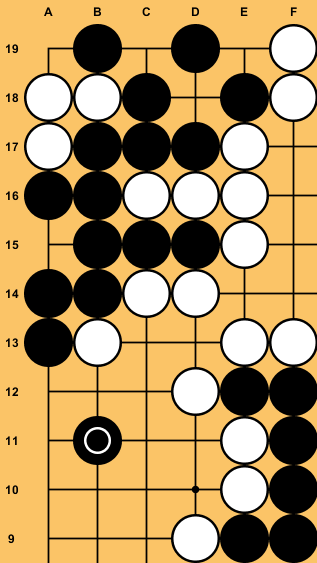 It was a chatty game, so time usage is a bit faulty. I thought I stopped it because B replied suboptimally tbh, AI I think ataris me to the end of crawling.

You might consider creating a diary thread to track your progress and games. I’m sure many will visit often and provide feedback

Lol I think it would be intimidating to anyone to reply to a review request thread with dozens of posts.

This time I did not look at the AI analysis, so this is solely based on my own opinion.

First of all congratulations on winning Gia! I was very impressed by your opening until around move 40. You played very strong and solid shapes. Though that changed a bit afterwards

As usual I hope this helps and keep up the good work!

This is your opponents move, but I’m commenting on it anyway. Learning from your mistakes is good, learning from other peoples mistakes even better

I sometimes refer my opponents to my review request threads.

On the second to last one, doesn’t B increase the liberties from 3 to 4? We were talking with my opponent about that later, it was a mistake he realized just a bit too late. (we didn’t get into the liberties thing, just that he made a mistake in the corner, we’re not that good