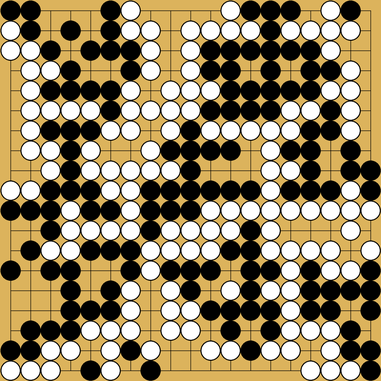 Well, this happened. Maybe I need 30 stones handicap to have a chance, who knows :-(.

I appreciate my opponent’s patience.

The Big Question is: why do I die so big and so badly?

Keep playing more, you will get better. Don’t over analyze.

Don’t worry about 1-3 point winrate difference. 10% is about 1 point. Does not worth it and in opening, it might be random or a preference. who knows?!

I don’t worry, I just find it weird, isn’t it weird for AI to have preferences?..

Please don’t start a discussion like this. Those nerdy kids love it. Even or odd number of stones to guess etc.

Those nerdy kids love it.

I welcome the Chaos with open arms.

The Big Question is: why do I die so big and so badly?

Gia here are 5 points in the game where I have a suggestion for improvement. Sometimes these suggestions coincide with what the AI wants to play, but not always. Keep in mind that Black does not need to fight too severely in handicap games. You should not always back down from a fight and let White push you around, but the lead enables you to play solidly, simplify the game and still win. You can afford to give away points now and then. So sometimes the practically good option is to play safe.

I hope this was helpful. Good luck in your next game!

The hane for move 94 I didn’t even consider, I need to catch liberty shortage sooner. (mine for defense, but also opponent’s for opportunities, hm I need to train on that)

Note that the AI still wants to play L4 at this point, but I feel like the attention of both players already turned elsewhere. It is what it is

Lol that was my note above about “I see your suggestion AI, but what about over here???”

One thing to remember is that the tournament format makes handicap rules favorable for stronger players, the bigger the rank difference the more advantage a stronger player gets. Say, at 9-12 stones you’d have had better chances to save some of your groups, making a big point difference right away.

The most important idea to remember about Martin’s comments regarding moves 70 and 80 is:

As always in go, there are exceptions to any rule, but before transgressing rule 2, think twice: if you don’t defend your weak group now, does the opponent have a good attack? Can you endure the attack?

We could try that if you want. Biggest I’ve given is 11 though.

This is nice, giving black stones stable footing and something close to territory: 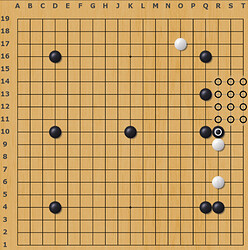 Here already, B might be better because it goes along the edge, enclosing corner as opposed to center-oriented move A. 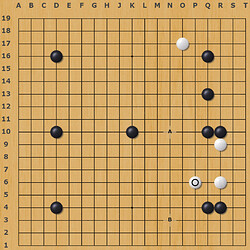 Here black encloses the corner → points and stability. The cut in black’s shape isn’t a problem, although at your level it might be. 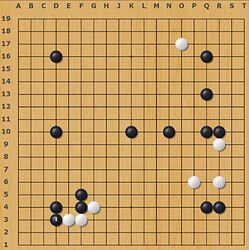 Here also you need to stand your ground in the corner: 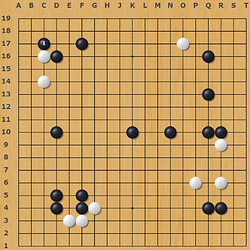 This is the sort of center-oriented moves that should be avoided. There’s still stuff to do along the edges. 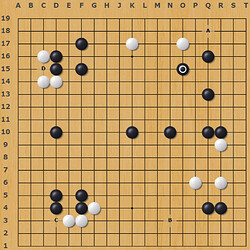 Also at various points in the game I noticed that black tried to cut and fight white everywhere, like this. 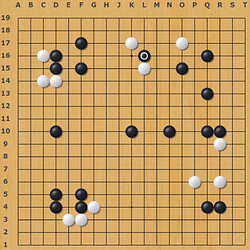 It’s a bit too aggressive. When you go for a cut that doesn’t work, you usually make yourself weaker and strengthen your opponent. So first you need to make sure the cut works and only after that cut. It’s doubly true when playing stronger opponents, because they understand cuts better so you need to be even more careful. In handicap games generally black should take more care of black stones, rather than seek weaknesses in white stones.

Some issues are common around your level (and even quite a lot higher).

Many examples of this have been pointed out in other comments, but I just wanted to make a short list to keep in mind when deciding on your moves in future games.

On the topic of nine stones handicap being insufficient, I did propose this thirteen-stone formation yesterday: 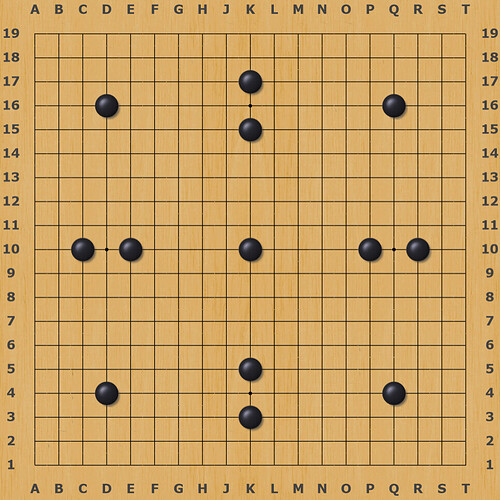