Review request how to defend upper corners 8kyu vs 18 kyu

Hi,
I would appreciate very much a review on this game.
I thought my two upper corners were safe but white took them with ease.
How to improve this defense? 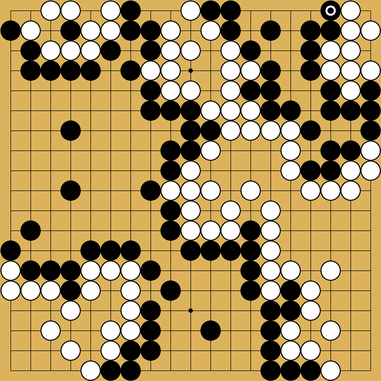 all tips are welcome.
Thank you

I’ve done a bit of a review of the two corner situations: https://online-go.com/review/334397

Your opponent doesn’t look to me to be 18k. Isn’t at SDK level, but the difference certainly isn’t 10 stones!

My first general comment is that you said you thought your corners were safe. However, they were both kinda open. The upper right was effectively just a 4-4 with a knights move enclosure, which is a very common shape and totally possible to invade. The 3-3 invasion would usually result in a ko (and both players are usually ok with that). In the upper left, you had a 3-4 with a high enclosure, which is also a fairly open shape. It’s more complicated and there isn’t a standard sequence like the 3-3 invasion, but in general white should expect to be able to get something in this corner.

The second point is that if you really want to kill, you probably have to be quite aggressive. Just pushing in a bit from the outside and keeping your shape strong probably isn’t going to be enough to kill these corner invasions. You’ll probably have to undercut eyespace or play inside or something. See review for some examples.

However, this also means that to kill you will end up leaving weaknesses. Often that ends up being worse than letting it live, especially early in the game. Eg in the top right I don’t think that trying to kill is good, even if you can. You can let white have a small corner territory, get strong, and take sente to play something else big.

However, in the top left when the game is almost over, you have a lot of strength around, and you don’t need to worry about a few small weaknesses on the outside, because white probably can’t do anything important with them once you’ve killed the corner. Connecting at D16 was a particularly bad example. That’s the sort of move that would’ve been a great idea if the sequence was playing out at about move 50 – you could force white to live small and get a nice strong wall towards the left. But at move 130, you can kill the corner, white pushing through there isn’t going to help the group live because you’ve got a load of strength around.

Another way of saying this: I said earlier that white would usually expect to get something out of that invasion. This is true on an open board, but probably shouldn’t be true here. But that’s only because of the strength black has around. So it follows that in order to kill that group you will have to make use of that strength somehow. It looked to me like you tried to treat that as a fairly isolated corner, and tried to just kill it all locally, rather than finding where you were strong around and using that. (In the game, you actually drove white towards probably your weakest point on the board, which is ultimately what let the group live.)

thank you very much. very useful! 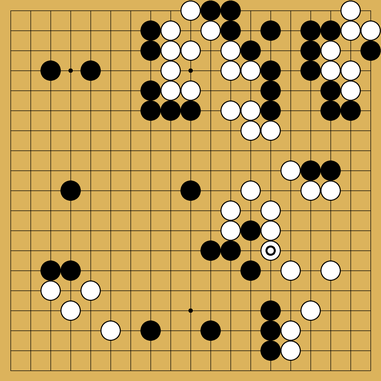 lots of small moves
famous quote “urgent before big”
when there’s no urgent you make big moves
what is urgent…it’s hard to say but if a move questions your group life/death that’s pretty urgent no?
if a move questions your opponent’s group life/death that’s also pretty urgent right?
so when your life or your opponent’s life is not threathened you can make huge moves right?
huge as in like taking big points or mapping out huge moyo etc.

reviewed the first 60 moves or so

thank you very much! very useful!