Most interesting to me is the bottom right corner. The AI says I played way too passively, but reading out the more fighting moves would have been challenging I think. Are there some concepts that could have helped me find the best moves, or do I just need to get better at reading?

Some pretty hilarious misses by both sides, including when we both passed at the end

The recommended move is this one: 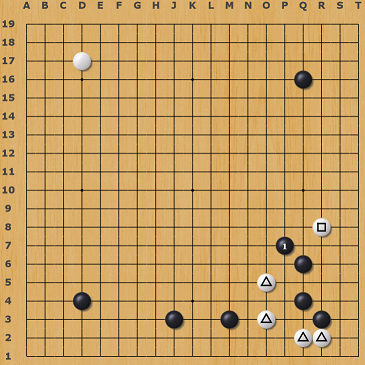 The idea is to separate White into two weak groups and go to the center. You don’t need to make two eyes now, by attacking your group will become stronger. Only make two eyes in case of emergency. Also, when you played the high move Q6, your group was “open” so the idea of Q6 is not to make territory but influence. If you wanted to live on the side you should have played R6 instead.

AI’s move sometimes requires a super human reading skills so don’t take it too seriously. Firstly your group was dead for a while. This is a Tsumego problem. Secondly you let white surround it too easily.

Unless your group is completely alive, it is often better to spend a move to make your group stick out to the center. Because if it is surrounded you often end up spending many moves to just make your group alive. Such moves are called ‘kikasare’ a passive tense of ‘kikashi’.

Just following up after doing some more of my own homework (and playing R6 instead of Q6 in a bunch of games and getting worse results):

If you want to play on the 4th line in response to the approach and enclose the lower right side in this line, you can do so by omitting the pincer at M3 and playing R9 instead: Josekipedia. (The tradeoff is white can play to the left and get territory/settle their group.)

Nothing very obvious there and even you tenukied once to play in the opposite corner but surely interesting. I think there is more to work on the following moves when letting black become enclosed or creating a black crucial vital point (that the opponent didn’t take anyway…)