At my current level, it feels like I know a lot but I understand very little.

Likewise, for fuseki, I play a mix of orthodox, low Chinese, nirensei and sanrensei, but what is my strategy after the first few moves? I know the 3-3 invasion on a 4-4 point joseki, but how do I use the outside thickness?

Basic tactics are easier to apply, which is one reason why I win 90% of my fights. The other reason is because I tend to play solidly, or per the principle (to quote Lessons in the Fundamentals) “keep your stones connected and the opponent’s separated”.

Per advice from past reviews, I am trying to look harder for big and sente moves, but I have little understanding of what makes a move big (other than the very obvious like taking an empty corner) and my attempted sente moves are often endgame moves too early or worse, thank-you moves. 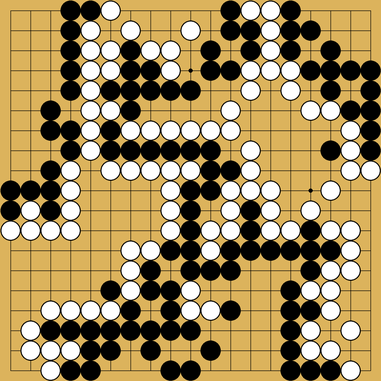 Despite saving a large vulnerable group from moves 27 to 41 and another from moves 101 to 113, I knew I was slightly behind at that point and had to grab some space from the right. From moves 142 to 154, White managed to separate my top and top-right groups (the former died), sealing my fate.

Thoughts on specific moves:
15 was probably unsound but I played it because I did not want a game where I completely own one side of the board while my opponent completely owns the other side.
For 19, I chose not to play a three-space extension from a two-stone wall because I felt the group would be too weak.
For 63, besides not wanting the three-stone group to escape, I wanted the potential to extend to the right.
69 was to prepare a three-space extension from two stones (which White prevented with 70) and prevent a 3-3 invasion as White was thick on the outside.
For 71, 73 and 75, I was not sure whether the White group was killable but I was trying to follow the principle that I could profit from attacking it even if it lives. Unfortunately, the sequence from 100 onwards neutralises any potential outside thickness. Perhaps 97 was a mistake.
133 was intended to be a three-space extension from a two-stone wall but on hindsight, it was a blunder. I did not foresee 142 and 144 at all, mistakenly thinking that the group was connected enough.
187 was also a blunder due to playing correspondence games too quickly.

Heya,
I tried to punch in some ideas for you here: https://online-go.com/review/537399
Plus hit off a full AI review for you as well, might want to check that out too.

Overall, I must kind of agree with your interesting assesment that you know a lot, but can’t use it in practice :D. I almost never do this (as I am not much of a reader myself and believe you can easily get to a SDK level without reading too much), but in your case you might benefit from trying to practice some basic reading.

I saw pretty much two types of mistakes from you throughout the game. Small endgame moves in middle game, and what I can only assume were severe reading errors.

I am not talking about any complicated 10 moves sequences, but learning to read a forced sequence two or three moves ahead (ESPECIALLY IN A CORRESPONDENCE GAME!) might be pretty vital for you currently. Your argumentation and ideas were usually correct (hence you were also winning), but if you mess up basic fighting then even a good plan just falls apart. It might also help you to roughly estimate the value of a move. If I play here I get this, but if I play here I get more and reduce more…

Thank you for the review.

One very big unanswered question: How could I have prevented White from splitting my top groups (thus killing the top-centre one)? For move 141, you suggested I tenuki, but perhaps a move that prevented 142 and especially 144 may have won the game.

learning to read a forced sequence two or three moves ahead (ESPECIALLY IN A CORRESPONDENCE GAME!) might be pretty vital for you currently.

I agree that I need to try to read harder and have more confidence in my reading. Perhaps I was intimidated because my rank had been 16 kyu for a while (rising to 15 kyu due to a long winning streak against weaker opponents) and this was my first 14 kyu opponent.

This is what happens when I do try to read against a slightly weaker opponent:

For move 141, you suggested I tenuki

Oh no, we misunderstand each other, I was NOT suggesting a tenuki (though it would be possible and a good option - just very complicated later), I was trying to illustrate that (forgetting for a moment there is a possible split of your groups) the very idea behind the move is extremely slow and best left for a very very late endgame.

How could I have prevented White from splitting my top groups

That is a simple question, but provoking a complicated answer. Preventing splitting of the groups is easy, just connect instead of the descent. However, at that point the game was relatively even, so such a safety gote move could cost you the victory.

There is complicated way to protect in sente or a better answer after the cut if black tenukied. I will add them to the review.