Can’t remember if this is a known bug or not. The score estimator for demo boards does not take captures into account because it uses territory rules. A finished drawn game in which black has captured 8 more stones than white will be estimated as W+8. I’m using New Zealand rules if that’s relevant.

So the issue is that that the score estimator DOES take captures into account while it shouldn’t? I am a bit confused by the wording, but NZ uses area scoring so captures should not matter, right?

Oh duh, fixed - it would be W+8 in this case. Score estimator uses territory scoring, but NZ rules are area scoring.

I don’t know if it’s known, but it’s definitely wrong, and not just for demo boards. Here’s another example, from a real game that went to scoring: 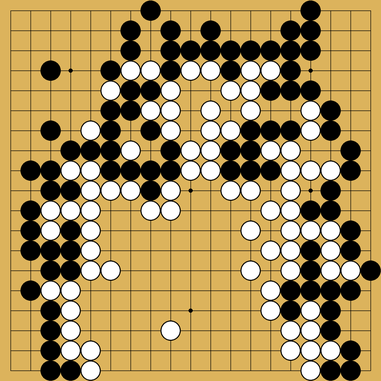 (You can access the weak score estimator by forking the game.)

Edited both posts again for clarification.

In case anyone wants to look into it, this line is probably relevant:

It’s adjusting the score estimate for Japanese rules, which is kind of strange since the score estimator already understands Japanese rules - and if it didn’t the Chinese rules would have been a fine estimate already, without adjustment. Likely related to that is some old unused code above that was counting points based on “ownership” instead of using the actual AI estimate. Maybe all that was necessary before we switched to KataGo?

Anyway I’m guessing that since this code is fudging the score for Japanese rules, the score estimator does some reverse fudging to account for that, and instead of writing if(rules == 'japanese') someone wrote something like if(rules != 'chinese').