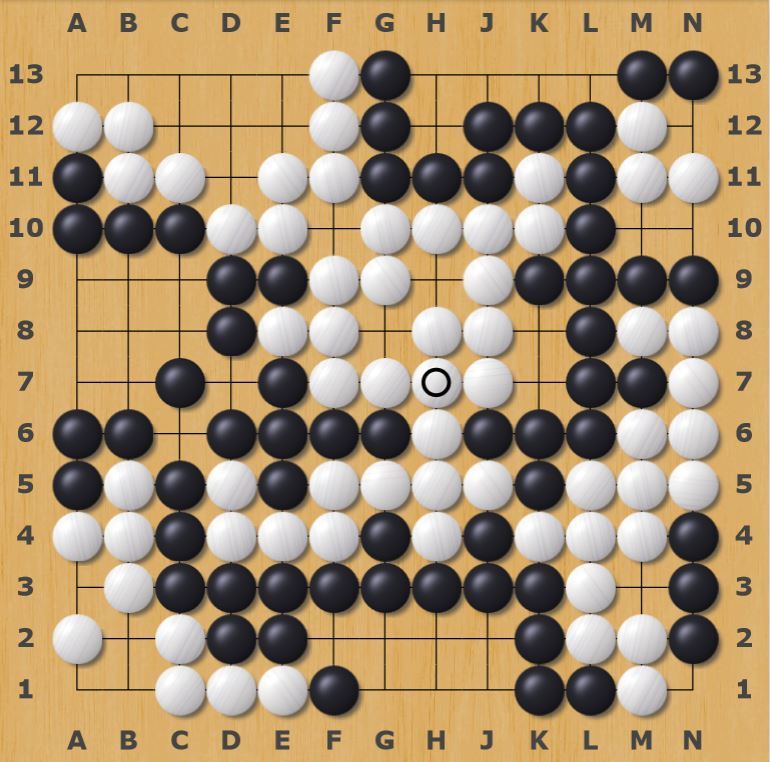 In Japanese rules, how does one score the bottom right? Black can kill with m3, but actually has to play it to convert the seki-ish shape to a kill. Is the white group fully dead in the scoring without black actually having to play m3? Are the three black stones also dead in scoring, since they must be captured and then n3 played to kill? Is it the same in Chinese rules?

Hello!
White’s group seems dead to me (not even seki-ish). Black can make it alive by mistake (N1), but for the purpose of scoring it is dead (and therefore Black’s stones are alive).
If you and your opponent disagree, you can resume the game and play it out to the end.

I’m not sure if there’s any difference between Japanese and Chinese rules regarding the status of the group. I think that there’s a difference in Japanese rules if you play it out to the end, Black loses a point (?).

The group is clearly dead, but as for the rules nuances, I’m not an expert. As far as I know, when the life and death status is under question, under Chinese rules the game can be resumed until the status is clear, because with Chinese scoring there is no penalty for playing inside your territory. Under Japanese rules that’s resolved by hypothetical play: the group is dead because it would be killed if the game were to continue. But exact details of how that works, especially in presence of ko, are rather complex.

There’s no disagreement between players - we were both just curious.

One effectively removes all dead stones from the board before scoring.

The white group is dead. Therefore, the black stick is alive.

True seki is the only time both groups would remain.

Is it possible for W to refuse to accept it as dead and force B to play M3? I mean if it’s a very close came with a 0.5 difference, I would like to force my opponent to play it and win. Or is it not necessary under Jap rules? Chinese doesn’t matter since it doesn’t reduce any points.

Is it possible for W to refuse to accept it as dead and force B to play M3? I mean if it’s a very close came with a 0.5 difference, I would like to force my opponent to play it and win.

In theory, as I understand it, the correct procedure would be this: the game is resumed, Black shows he can kill the group in question, then the board is reverted to what it was after the two passes and the group is counted dead.
As servers typically do not implement this, in online practice the situation you describe would require an arbitration by one of the guys with a big hammer.

Edit: I said “the game is resumed” above, but technically it’s not. Resumption is when you do not agree on score and continue playing until another two passes. White certainly has the right to do that, but Black would just have passed again. After enough repetitions of that cycle the guys with big hammers get invited anyways.