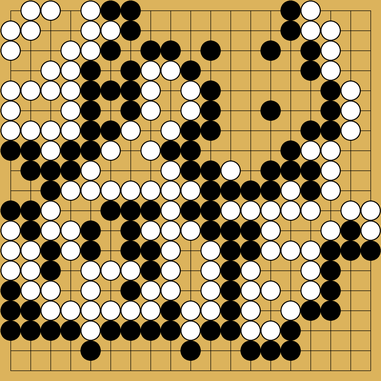 The automatic scoring marked the bottom-left four-stone black group (A5, A4, A3 and B4) as dead even though I could not capture it. Even a TPK can see that white on B3 is self-atari.

When I tried to click on the group (to mark it as alive), it caused all black stones to be marked as dead, giving me a 367.5-point lead!

Move 238: I passed. Move 239: he passed. Although my opponent accepted the automatic score (white wins by 3.5 points), he then said in the comments: “i think the computer’s counting is wrong” (and the score estimator gives Black a win by 0.5 points).

Not sure where to post this, but choosing here just in case it is a bug. More likely that I need to improve my counting skills. (If any SDK wants to do a full game review, go ahead.)

Now there is a bug with scoring in that the lower left area could not be marked as black’s territory.

However, white was winning by 2.5 points anyway, so black filling did not make a difference to the end result. If you want to make sure you don’t lose any games due to scoring problems, play with Chinese/NZ rules and FILL THE DAME (each worth +1 point!) at the end of the game.

After dame are filled, you can play in your own territory all you want without losing points.

Low DDK use score estimator. I did. Then I found out it was wrong and don’t use it anymore.

The only way to use it is to have a raw counting that you must mentally correct looking at the board. Sometimes it works, sometimes it’s easier to just count.

In a previous thread I posted some example of wrong counting. I’m talking about japanese counting.

I took the liberty to change title and category of this post so it gets the attention it deserves.

I took the liberty to change title and category of this post so it gets the attention it deserves.

Thanks! Hope the bug will be fixed soon.

Low DDK use score estimator. I did. Then I found out it was wrong and don’t use it anymore.

That would be me. Still making the transition from TPK to DDK.

If you want to make sure you don’t lose any games due to scoring problems, play with Chinese/NZ rules and FILL THE DAME (each worth +1 point!) at the end of the game.

To be honest, I (and probably most players at my level) know very little about counting, much less moveset differences. Is there a guidebook suitable for my level (TPK transitioning to DDK)?

Is there a guidebook suitable for my level

The quote was from @smurph’s post, not mine, but I’ll tell you what I know.

My first games on 19x19 were lost or won by undreds of points, so counting wasn’t really necessary

and score estimator was enough to understand the overall figures.
Then I learned something and matches were lost or won by 30-40 points or so. Still not so necessary to have a precise count.
Now my rank is around 13-9k (very unstable) and, if I don’t make major mistakes, my games are lost or won by 10-15 points or less. Now counting becomes very important, also in middle game.

I’m not very interested in matching different scoring systems to see differences: I use japanese because I learned so, but I don’t find it so confusing.

The basic rules are here: http://playgo.to/iwtg/en/
See chapters 22, 23 and 30, 31.
When all borders are closed, counting is boring but very easy: surrounded territory + captured stones + komi (only for white). These are japanese rules.

If borders aren’t closed you have to guess how the game will progress and try to count approximately. It’s a good exercise to choose your next move: I often do it in correspondence games when I think I can make a choice (say: when I think my opponent’s move isn’t sente

If you want to read more:
https://senseis.xmp.net/?Counting

I added few variations to your game trying to explain why (I suppose) score estimator marks the A4 group as dead.

That group is weak and could be captured if black makes a mistake. That’s a frequent mistak by inexperienced players so that me and a friend of mine gave a name to it: “the crippled armadillo” (don’t ask me why

).
In our first games on 9x9 it occurred to us many times.

If the F3 group had less liberties (H4 and J4 filled could be enough, I think), the crippled armadillo could bring to a significant loss in points (first variation) or even the capture of the A4 group.

E2 and K2 are unconnected and are exploitable weaknesses.

Anyway, in the “stone removal phase”, after both players passed, they should be able to mark any stone alive or dead as they will (hence the bug report).