At the end of games, or when selecting Estimate Score during a game, I can click around and it will cause the score to change and various areas/groups to not count in the scoring. Is this toggling between scoring methods, allowing me to selectively change the evaluation of a group/area, or something else? I couldn’t find this question answered in searching the forums or FAQs but I didn’t look for very long. If there is a link to an explanation that would be fine.

It’s changing the status of stones or groups of stones. Basically you’re telling it which stones are dead even if it doesn’t estimate them to be dead at the moment.

The computer cannot score the board because the general case of this problem is very hard. Essentially, to determine the status of a group of stones means to play out perfect moves for both players until two eyes are trivially visible or the stones are captured.

That is why the players must mark dead and live stones at the end. On OGS, the system will even helpfully pre-mark the stones based on heuristics. It guesses correctly in many cases, saving us many menial clicks on stray prisoners.

[…] finish up your games. Don’t leave holes in the territory before you pass.

To expand on Animirals explanation: “Walk” along all borders between your and your opponent’s territory and make sure that they all are securely closed, refer to Dame and Teire on Sensei’s Library. If any threat is possible, you may want to reinforce.

The estimate score function is the most (and only) useless function on OGS.

The estimate score function is the most (and only) useless function on OGS.

The estimate score function is a wonderful help - some would say crutch - during mid-game play.

It can warn you when you have groups or territory that you thought were safe but are not.

It can guide you with where is big and open and where is not.

It is only useless if you are oblivious to its limitations: it is and estimate-or. It produces estimates.

Personally, I think it is so useful it should be disabled.

The estimate score function is a wonderful help - some would say crutch - during mid-game play.

It would be, if it were accurate. But if never produces accurate results. During mid-game, it counts measily points. Even during endgame, when mostly everything is settled it changes its estimate every time I click on it. Even when no additional moved have been played. Screenshots to come…

Sure - that’s why it’s called an estimator. Because it does not produce accurate results.

But I for one get so much benefit from it’s approximate appraisal of my position that I’m embarrased each time I click that button. Which I quite regularly do.

Personally, I think it is so useful it should be disabled.

I’m kinda with GaJ on this one. I abuse the hell out of SE, especially during mid-game and end-game. The number it gives you is almost irrelevant but as GaJ said [quote=“GreenAsJade, post:6, topic:12775”]
It can warn you when you have groups or territory that you thought were safe but are not.
[/quote]

It’s saved my ass on a number of occasions when I’ve over-looked crucial cuts (and thankfully so has my opponent).

Also, it alerts me to areas that I thought were securely mine, but if SE is saying I don’t control it yet… then I give stronger consideration to an extra stone or two in the area to sure things up a bit. 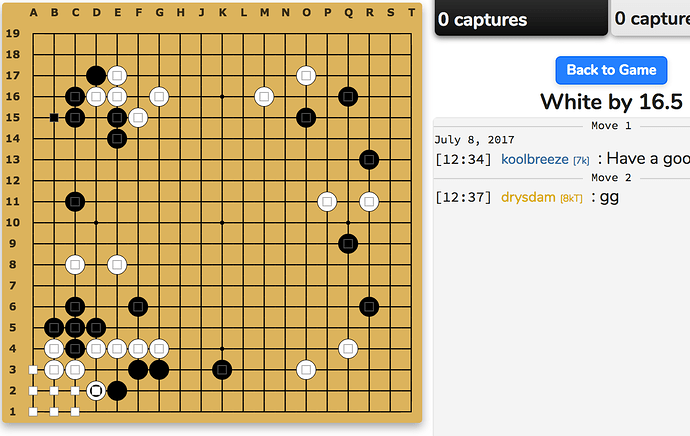 Here is an example of a game that is clearly in Middle Game. As you see, the Score Estimator does little to estimate the score.

I’m really not sure what is the point that is being made.

This is very early mid-game, and you can easily eyeball the situation. So there’s not much that the score estimator can do to help you. There is no “accurate” estimate of either side’s score that any tool could do, because there are barely moyos let alone territory. To be more precise, you’d need AlphaGo or Leela to come along and give you a %chance to win, and hot spot analysis.

For what it is worth, it has correctly alerted you that your top left group is not fully alive yet, and that the bottom 4 stones in a row are at (small) risk. If those two things were secure, it would be assigning you territory in C3 and F17. So that’s a small help already - just indicative of the type of assistance it offers.

I think it’s all about expectations. If you are expecting it to be a score calculator and to deliver a precise assesment, then you are of course disappointed.

But if you take what it does - an estimation - and understand what it does and does not tell you, then at least some people can get use out of that.

So much use, in fact, that as I said I personally would prefer that it not be available, and use it “guiltily”.

because of the exact same reasons that you suggested, it could be a very bad habit if you depend heavily on it, and fail to do all those in a live game.

I am struggling myself. I know it’s a bad habit , but the temptation is just to big.