I imported a game a bit earlier, but I wasn’t ready to review it yet. I went over now and it looks like this 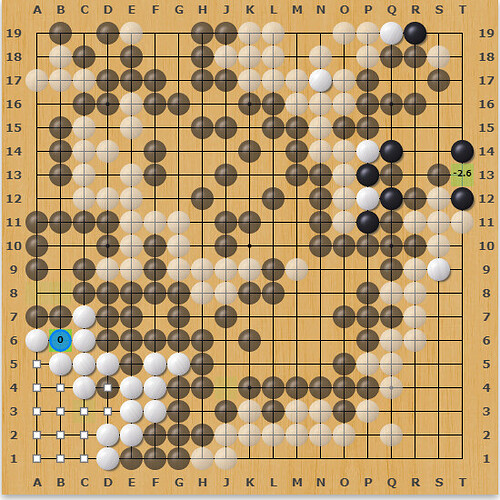 I’ve imported it from the same client as another 5 games, with the same way and consistent file names, but all the other games are OK.

It’s not that dead stones appear faint, it looks random.

I “cleaned” the SGF file from your game by downloading the SGF and reprocessing it through another editor. Here is the “cleaned” file with the territory tags removed:
cleaned.sgf (2.9 KB)

I also reuploaded it here:

I only posted the screenshot and not the link

Thanks for looking into this.

It’s weird because it went to scoring, I don’t know if sgf stores score as well.

At least I marked it correctly in the original (I mean the actual game), B+110,5.

I don’t know if sgf stores score as well

Yes, the result B+110.50 was stored in your original SGF file and preserved in the clean version that I uploaded as well.

Actually, it’s possible to set that arbitrarily and OGS will just display it

Black wins by an elephant

Black wins by an elephant

This came to stay.

The score estimator (not KataGo, but the button on the side menu) uses Chinese rules, whereas your game was scored with Japanese rules. Since there were some extraneous passes by white, that will increase the discrepancy between Japanese and Chinese rules.

Note that filling dame at B6 should affects the score under both Japanese and Chinese rules, since Black playing there would require White to protect at A5. Hence, KataGo also disagrees with the final scoring.

Of course, I understand that you may have just wanted to avoid dragging it out any longer.