The game was played to its conclusion and under japanese rules I won 185.5 vs 179, as is correctly displayed under the player avatars.

However, the game is then proclaimed won by black by 21.5 and the game info now says Chinese rules are used. 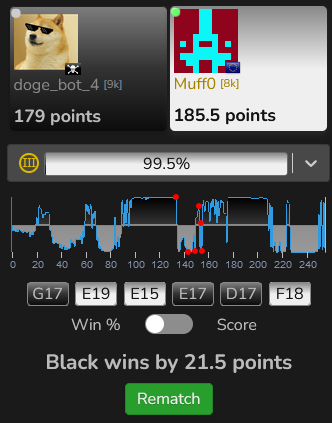 I’m 100% positive I did not set those by accident, I’ve even tried creating other bot games with japanese rules and the same thing happened.
(In fact I don’t see any mention of rules at all in the bot game creation form apart from the preferred rulesets)

The issue isn’t limited to doge, I tried other bots with the same result.
Currently on Firefox but I’m fairly certain I’ve had this happen on Opera too.

Sorry I’d post more screenshot but I’m currently limited to 1 since I never posted in the forum before.

How do you create bot games with japanese rules? Most bots only understand chinese rules and I get no rule option at all when creating bot games.

The first thing would be that most bots don’t play with anything other than area scoring rules, usually Chinese rules.

Most bots only understand chinese rules and I get no rule option at all when creating bot games.

It’s probably directly sending the bot a challenge rather than the bot creation option from the play page.

Yep, I just tried, when challenging the bot with japanese rules it silently changes to chinese.

My bad, didn’t know bots defaulted to chinese.
I also noticed bottom right group was marked as contested since i missed the cut point.
I definitely need more coffee.

I think there’s a lot of things that could be made a bit more obvious, rather than passed on by word of mouth and or potentially in an off-site documentation