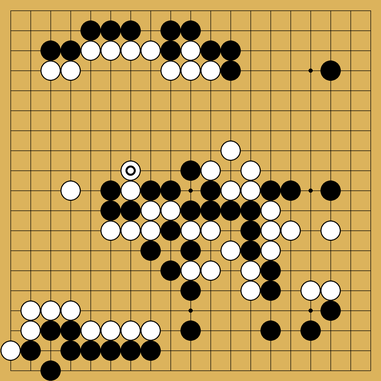 Black played F11 and I played G12. Immediately I got an error message accross the screen and, when it had cleared, black’s clock was running but the icons in the top right indicated it was my move. My G12 stone was never placed, and I could not play a stone there or anywhere else.

Both my opponent and I were seeing the same thing. I refreshed several times, exited and re-entered the game, and nothing changed

That F11 stone is not in the game record, and spectators I talked to couldn’t see it. According to them it was black’s turn with black’s clock running.

I just got something similar in my game. http://online-go.com/game/682931 I was playing as white
I saw a black move at M12 and I quickly put my stone next to it. I immediately got “Error processing move” across the screen. The error message disappeared after few seconds. My clock was running even though I had just placed a stone and I could see it on the board. I was on my last byo-yomi period of 30 seconds so I decided to quickly refresh the page.
After refresh there was no black stone at M12 and black’s timer was running! Then I told my opponent that he might need to refresh and so he did. When he refreshed the page I lost on time. It seems my time was running the whole time. Very weird bug. I hope you nail this one