Stones on the board hide the remaining time in thumbnails

Well the topic and pic should tell it all :3 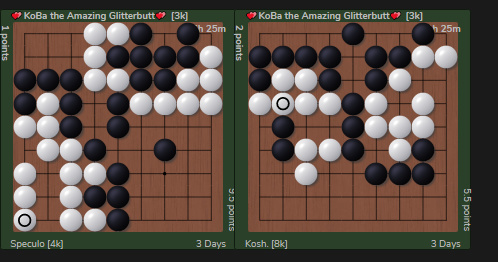 It’s because your name is so long, it “pushes” the time remaining down to the next line.

Given the choice between having the devs look at this, or look at other important requests, I’d chose the others every time.

In the mean time, people with rather long names have the choice of keeping them and accepting that in some places the display is broken by this, or reducing their name length. IE there’s an easy workaround, if you really want to see those remaining times…

You’re right, it’s the long username what’s causing this, and many more UI bugs on the site, but does that mean nothing should be done on the servers side?

the right solution is to limit the length of player names

I kinda agree with this one myself too ^___^

Limiting the name to 12 letters/numbers (and a dash if desired) would probably provide sufficient latitude for everyone.

You’re right, it’s the long username what’s causing this, and many more UI bugs on the site, but does that mean nothing should be done on the servers side?

It’s a matter of priorities.

The developers are volunteers, and have limited time. They face an unlimited queue of requests, plus bugs to fix.

In view of this, would it be better for players to limit themselves to names that work, so this problem is no longer a problem, or force the the devs to make this change instead of doing something else more worthwhile with that time?