So when I play I tend to play moves really fast no matter how much time I have or no matter how difficult the opponents move might be. My brain is convinced it already knows the move to play and no amount of extra thinking will give me any better chances.

Obviously this is just my brains automatic thinking and its not actually true. Taking time to think will “almost” always produce a better result. (I won’t say always because I know if you take to long to think in some situations you can over-think).

but I want to play a lot slower and to actually think about the moves that I am putting down on the board. Which poses a question for me what does everyone else do to slow themselves down and remind themselves that they are playing to fast?

Note: I am a 4d+ do not feel scared to comment as a lower ranked player you never know maybe you have the solution or a solution that simply works for you!

I have a checklist that slows me down, but that might not be the right solution for a Dan.

Can you tell me a little bit more detail about this check list? I doubt it would work for me but I am interested regardless.

What do you have on the check list exactly?
Do you check it every move?
Do you feel its successful in doing what you intended it for?

The biggest help for me was playing without my hand on the mouse. It buys me at least a second between seeing the move, reaching for my mouse, and making my reply, to give my brain some chance to catch up to my hand haha

Beyond that, I too have a short list of questions I try to ask myself each move before touching my mouse on serious games (but in practice it’s probably less than 50%)

It’s really just the basic play checklist. I do it, mentally, each move.

I think it works for the main thing for me, which is stopping puppy dog go. It changes the thinking from “how to respond to their move” to “what is actually the next best move”.

I tried to keep my list as simple as possible, because I know the more detail I add, the less I will use it.

This is what I have open on my second monitor during a serious online game: 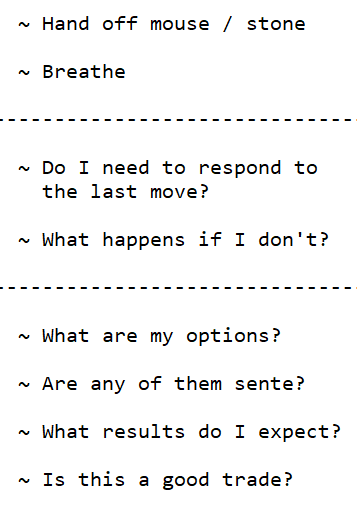 Nice! I think I have some of that going, but not written down.

There is no copyright, if you would like to borrow it you are more than welcome

The last 3 options were probably the biggest additions after the first one (hands off! haha) because before that I was trying to find a “good move” without actually thinking about what moves would come after and how each of us would benefit later in the game from my “expected sequences”

Even if my expectations prove wrong, actually thinking about them proves beneficial to my play.

You know what I actually like this I might try this not just to slow me down but possibly also to remind myself about how to actually play the game.

The biggest help for me was playing without my hand on the mouse.

I like this a lot as well its super simple and definitely buys time to think.

I know in over the board tournaments, I’ve made a written record of all my games partially as a trick to get myself to slow down. Online I do something similar by instead using a physical board to place stones on (to give a psychological “weight” to my moves).
Other than that, a usual question is taking inventory of what all my opponent’s threats might be, or what other threats I might combine for a longer form plan.

Four of the items on BHydden’s list are advocated by Haylee as ROSE, Respond? Options? Sente? Expectations? She has a short video about it here: Deciding Next Move with ROSE - YouTube. I have used this for my games for a couple years

Yes, my primary influences in creating my list are, in no particular order, Haylee’s ROSE as mentioned above, Clossius’ “Clossi Approach”, and individual lessons from my two main teachers over the last few years (both mid dans living in Australia)

“A stone (mouse) in the hand wants to be played~”

I remember a quote from a certain very strong chess player of last century. Perhaps @Conrad_Melville remembers his name, but I don’t.

He said that before any important positional move, he had a mental conversation with each one of his pieces in turn, asking them whether they felt happy and developed, and if there was anywhere they’d feel better placed.

At one time I tried a similar approach to Go, pausing to ask my groups how they felt about their position, whether they needed defence and to what part of the board they wished to develop.

I don’t do this any more, but it’s an idea and certainly slows down one’s speed of play.

I have same problem. Recently I’ve been trying to find other moves that work well, even if I go with my original move in the end.

This quote (found on some chess forum or other) kind of inspired me:

When you see a good move, look for a better one
- Emanuel Lasker

When you see a good move, look for a better one

Avoiding playing weaker players (except for teaching games) might help. When you face weak moves on a consistent basis, you’d be more likely to make “responding instantly” your default. If you keep facing tough moves and situations though, your average response time would automatically increase which might turn into a useful habit in the long term.

I think this is actually good advice especially for me because… its really hard though between 4d-7d because both players understand the game to a level where if you are the 7d playing the 4d without handicap theres a chance that the 4d will take at least 3 of the games out of the 10. But, that doesn’t always apply to every 4d player. I have met 4d who are complete clowns and its a wonder how they got there (Not trying to be insulting to those people)

I guess rule of thumb would be just to focus better on every game even when the opponents are less then adequate.

I heard that quote attributed to Bobby Fischer.