I wonder if we could get a notification say, an hour before a tournament starts.

I know we already get one at the moment a tournament starts (if the toggle is on), but I think it would help with the mass game resignations from people who sign up, forget about it or life happens, and suddenly they have 10 games out of nowhere and they resign all the games (and sometimes forget to resign from the tournament, so in multiple rounds they have the same issue next time). For the opponent it might be a bummer, expecting to have a fun game and just have their opponent resign.
(I’m not saying they shouldn’t resign, I’m saying why not have a way to minimize resignations, if possible).

Pairings/ groups would be better if they didn’t have one player resign from all their games, which happens a lot, but instead everyone is settled before the pairing/ grouping starts.

Especially in correspondence tournaments, this hour could be a buffer of sorts, and there would be an 1-hour pause between rounds, for everyone to resign if they want, before the next round starts.

-I don’t think an hour difference is an issue even in fast correspondence.
-Time zones will be an issue, since 1 hour will not make much difference if everyone is asleep, but it would be better than nothing, the time a round starts is random anyway (since we never know beforehand when the last game of a round will end).

What are your thoughts? (And how feasible is it?) 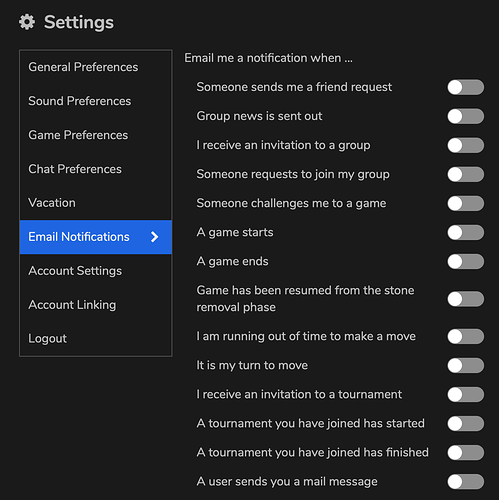 Yes, something in that menu.

Especially in correspondence tournaments, this hour could be a buffer of sorts, and there would be an 1-hour pause between rounds, for everyone to resign if they want, before the next round starts

Like idk if this is needed, but it would be helpful to both know when the new round starts and when one round that isn’t the final round is about to end. But like you dont have to get those notifications if you are out if the tourney(this might be too complicated but I don’t know how it works)

I don’t know if this can happen, since we can’t know when a game is about to end. I don’t see how this could be.

Well if they have like 1-2 games left in the round or something.

Like imagine the game ending at 4am and being asleep from 4am to 5am. That still has this issue.

Yes, but there’s no way to know.
1-2 games can take from a few hours to weeks. I don’t see how that could be useful.

But knowing that a tournament has indeed ended and someone is probably about to have anywhere from 1 to 10 games added in an hour can help; they can resign if they want or arrange their other games.

Time zones is a thing, but I don’t see a way to accommodate everyone. More than an hour would be too much, everyone who is on has enough time to arrange stuff, and it’s not the end of the world for people who are blissfully sleeping.

It’s just a little thing that would be nice.