Trouble understanding a game where territory is lost by one stone

Good evening gentlemen and madammes, I am playing on my mobile “go”. I’m a new player to be honest. What I’ve learned has been through viewing my games and going through mistakes and correcting them.
Today I played a game that really baffled me.
Here are the screenshots: 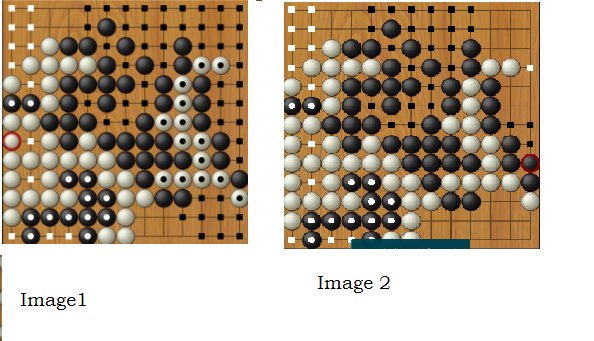 This first screenshot (Image 1) shows on the lower left corner a territorial problem, As can be seen I am trying to kill all of those pieces… But what happens if, as seen in Image 2 I place a stone trying to disconnect the white stones, i immediately lose territory. I don’t understand why, and would like an explanation if possible, why am i losing my territory this way? Shouldn’t whites be disconnected completely?

I have the feeling im missing out on some theory. Any help on this matter and helping me be less ignorant would be highly appreciated.

If I understand correctly, you are using the OGS score estimate to analyze your game. You should not do that as it is unreliable (that’s an understatement). Just play out the position to know what is actual territory.

In image 2, the whole right hand side is now white, the 4 black stones only have two liberties left and white, playing first, can easily capture them.

In image 1 black still had a chance to capture white by taking one of its liberties (I’ll let you guess which one).

I think that in Image 1 my playout should have been placing a black stone on the lower board (enclosing white) that way, even if white puts my stone in atari I could have completly surrounded white, and then would only have to place a stone on the border of the board.
Maybe im wrong and still not seeing what you would have liked me to see.

I wish I could post a review, but I couldn’t find your game on OGS.

I was playing on my mobile phone. I dont have ogs for android. Ill check it put now

I created a puzzle to show the 3 possible paths:

Warning: puzzles might switch colors or change the orientation of the board.

Wow, you’re amazing! Thank you. Ill give it a shot