I played two 9x9 games today. I have some questions, and would appreciate reviews from some stronger players.

Questions about first game:
Q1: Apparently my opening wasn’t so good, because White managed to live on both sides easily, and later killed half of my stones. How should I play After F5 opening and his answer on D3? What do you think about third move?
Q2: After J8 in move 29, White wasn’t able to live independently in top right corner, but he successfully killed my left stones by cutting through E5. Was there any way to kill that corner and save all (or most of) my stones (I would probably win in that case…)? If not, then after some move I should have stopped trying to kill it and start attacking on other sides. Which move is it and how should I play after it?

Questions about second game:
Q1: What do you think about Whites opening (first 6 moves of game)? I think my C6 in move 7 wasn’t so good, and white could have won. How should I play in move 7?
Q2: I am not sure what White wanted in move 30. I think he should start ko fight. Would he have won in that case?

Also, I would be very thankful for any additional suggestions, explanations or advices. 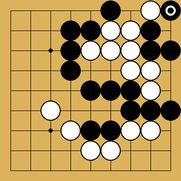 (1) Black’s opening was fine.
(2) If black connects, black can still make ko. It looks like black can win the ko, so there was time for it. 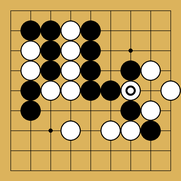 (1) White’s opening was okay. Move 4 could be one higher, but it’s a small difference. Black’s move 7 was also good.
(2) No. Not really. White’s losing move was getting separated before then, I think.