Here are two related endgame problems, with the same conditions 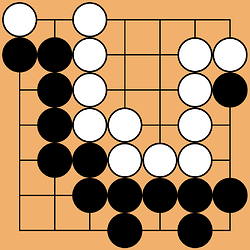 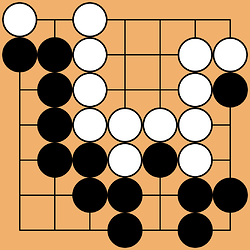 These examples come from the book “Mathematical Go: Chilling Gets the Last Point” by Elwyn Berlekamp and David Wolfe. The didactic purpose is to illustrate how quantifying the value of endgame moves must go beyond the typical real numbers. Instead, a very technical system is necessary to accurately and methodically work out exactly how to win the last point in the endgame. I don’t understand any of the details in the book, but it sure is fun and humbling to flip through and glimpse at how much I don’t know about Go.

“Mathematical Go: Chilling Gets the Last Point” by Elwyn Berlekamp and David Wolfe

I haven’t started reading it yet, I’m still busy reading “On Numbers And Games” by Conway (which might actually be relevant to my PhD thesis, although it’s unlikely).

I did have a quick look through some of the Berlekamp’s book before and it was very hard to take it in.

It has things like assigning values ✱ to positions with rules like ✱+✱=0, and that’s fine, it’s just the manner in which things are presented are kind of annoying (quite a lot of here’s the value of this position and some notation we won’t explain til later except it’s not clear when in the book that will be).

Chapter 2 is very heavy on notation and I do find that while pictures can help when assigning a meaning to something like ✱, it’s also not so helpful when you’ve to recognise ✱ in some other context but you don’t have enough information about it other than the picture. I think it’s those types of things you’ve to put aside until the game theory section is done, but really the ordering just seems kind of poor.

So it introduces some infinitesimals ✱, ↑ and ↑+↑=

, ↓=-↑ etc and tells you you can figure out who can win very hard (gote) end games by figuring out these little details, rounding fractional values depending on who is to move, and dealing with the infinitesmals.

It’d be something I’d like to read and understand if I can get into the right frame of mind, and maybe take notes on it.